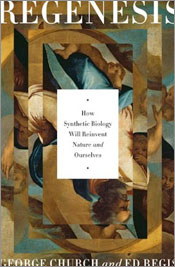 High on mine is Regenesis: How Synthetic Biology Will Reinvent Nature and Ourselves by Harvard professor George Church. It hit shelves in the traditional paper and ink format on Tuesday, Oct. 2. Yet Dr. Church has carried billions of copies of his book stored in a small test tube that he carries around in his pocket since last spring.

How is this possible? Dr. Church and his research team at Harvard recently converted the 53,000 word book into DNA. And it wasn’t just words that made the jump from text to genetic storage—the researchers encoded 11 images and even a computer program in their book, making this ambitious project the largest and most complex use of DNA as an artificial storage medium to date.

DNA is, of course, capable of storing complex information such as the instructions to create an entire human being.  No small task, considering that it consists of only four bases: adenine (A), guanine (G), cytosine(C) and thymine (T).

DNA has several unique advantages as a data platform, most importantly its capacity to be an incredibly dense storage system. Unlike traditional mechanisms of storage which are confined to two dimensions, DNA can store information in glorious 3D. The authors of the DNA Book compared different technologies for encoding data, converting the information into volumetric data densities; although traditional data is encoded in 2D along a flat surface, a CD (for example) still has thickness, which was used in the volumetric calculations. A commercial CD contains roughly 413,000 bits per cubic mm. In contrast, the purified DNA book produced by Church and colleagues is stored at an astonishing 5.49 x 1015 bits per cubic mm.

Put another way, if that CD was made of three dimensionally encoded DNA, you could store 13 billion albums on one DNA disc.  Not too shabby!

DNA is also extremely durable. When purified or properly preserved, it can survive for thousands of years unharmed (Remember that part of Jurassic Park where they extract DNA from amber-coated fossils?  Totally true!). It is stable at a variety of temperatures, and is biologically suited to be a long lasting storage medium. The fundamental tools necessary to work with DNA are literally encoded in all of nature; it doesn’t take long for our technology to outstrip and outdate our storage media (Jazz drives anybody?), but the enzymes and chemicals necessary to work with DNA are literally carried within most organisms on this planet.

That isn’t to say, however, that current DNA technology is user-friendly. Although the scientists in this study were careful to use “off the shelf” technology to create and sequence their DNA book, they are still professional scientists with training and equipment expertise in DNA manipulation. Even more of a hurdle is the expense: DNA synthesis and sequencing is still expensive and not commercially available to the average Joe.

But the times, they are a changing. Remember the hullabaloo surrounding the human genome project? Initiated in 1990, it took $3 billion dollars and 13 years to sequence the first human genome (however, this cost also included scientific activities related to genomics – the human genome sequencing was only a fraction of the overall budget). Now, it is estimated that the cost to sequence a genome hovers around $7500 dollars, and dropping rapidly. Perhaps DNA as a storage medium is closer to affordable than you may think.

But exactly how close are we to a sci-fi future? The idea that we’d be able to swallow a DNA copy of the Encyclopedia Britannica and suddenly have the information embedded in us is still wrong. Yes, the entire encyclopedia can be encoded in DNA, but if we ate it our body would just digest it.

We could theoretically create and infect ourselves with an Encyclopedia Britannica virus (e. britannicus), but it wouldn’t mean very much since the body’s mechanism of “reading” DNA is different than the technique used by the DNA Book researchers. In fact, DNA as an ideal storage medium works best when there are no living organisms involved—a fact acknowledged by the Harvard research team. The biological function of our natural cells could be disrupted or even damaged, the information is much less stable in living ecosystems and there would be a constant problem with DNA degradation or mutation (practically a non-issue when DNA is purified and stored on a microchip). So don’t hope to have an Encyclopedia Britannica add-on tacked to your genes any time soon.

Even though Church’s book can be easily copied and distributed (they considered including a DNA copy with every print edition of the book, but decided against it), the cost of reading the information with a DNA sequencer remains too rich for everyday use. For the time being, your best mechanism for checking out the Encyclopedia Britannica will still involve a trip to your local library. Stop on by—we’d be happy to help you learn more about DNA technology, sequencing and data management and storage. We may be using those old fashioned print books to help you out, but sometimes it’s nice having a book in your hand rather than a test tube of DNA.

Jackie Wirz is an Assistant Professor and the Biomedical Sciences Information Specialist at the Oregon Health & Science University Library. She earned her Ph.D. from Oregon Health & Science University in Biochemistry & Molecular Biology and has a B.S. from Oregon State University in Biochemistry & Biophysics. Her research career has spanned 15 years and has covered diverse topics such as transcriptional regulation, macromolecular structure determination, collagen biophysics and DNA repair. Her professional interests include information, data, and knowledge management, as well as the publishing paradigms of scientists.

Additionally, Jackie is a strong proponent of science outreach and volunteers with a variety of programs designed to promote scientific literacy. Jackie believes in evolution, salted caramel buttercream and Jane Eyre.