The letter is yellowed and a little torn around the edges but the words still stand out as freshly as the day they were written. At the top is an address in Bradford, Yorkshire, England, and the date – August 15, 1915. It is addressed to “My Dear Nurse.” The final pages have been lost so we don’t know much about the writer, beyond the fact that he was a soldier, wounded in action. The penmanship is that of an older man, but then young men aged quickly in the trench warfare of World War I.

We do know about the recipient, however. Her name was Elizabeth Magdalene Lewis and she was a theater nurse, a ward sister and my maternal grandmother.

Our soldier could have been wounded on any one of a number of doorsteps to hell that year. Records place the Yorkshire regiments in Europe in 1915, and prominent in the capture of Hill 60. His physical and mental injuries were, however, sufficient to put him in the care of my grandmother at the Gloucester Infirmary for, as he says, “many long dreary weeks.”

The letter (excerpt pictured below) offers a unique and personal glimpse into the relationship between patient and health care professional in 1915. Its language is formal, almost biblical and revisits none of the horrors that had hospitalized him. Instead he observes my grandmother carrying out her duties, “never loth to administer your valuable knowledge to each and every patient alike.” He expresses his gratitude that he was able to “obtain so skilled, so experienced a person as you to look after me.” 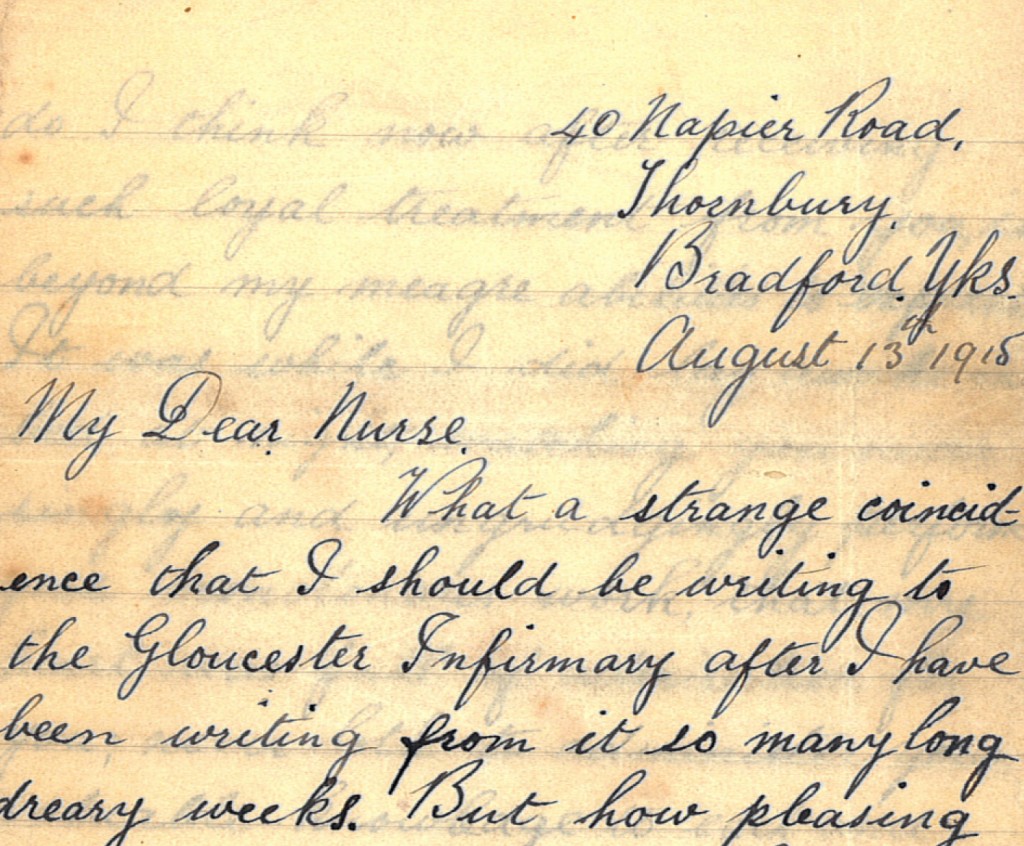 If she could travel through time, I feel my grandmother would be very happy to see how her profession has grown and developed since the formality of 1915. She would also be proud of the research that now contributes to the continuous development of the nursing profession, and enthusiastic about the pivotal role nursing will play in increasing access to care through leadership involvement in reform of the health system.

I also believe that she would be proud of what has not changed. To quote our unknown soldier:

“It was while I lay awake in bed at night, watching you unceasingly and ungrudgingly perform your monotonous work, that my heart was full of admiration for you.”

It was the skill and attention of my grandmother and her colleagues that eventually allowed him, toward the end of his stay, to “enjoy a drive around the glorious country and I was never more surprised in my life to see so many miles of fruit trees, unprecedented in this part of the country.”

My own mother has kept this letter since her mother’s death. Although I have known about it since I was much younger I feel its instruction more keenly now as I meet our nursing alumni, see them in their professional environments and hear their own stories. “Pay attention,” I hear this grateful patient telling me from almost a century ago. “No matter what else has changed, the dedication to the patient that I saw and described in 1915 is still at the heart of the profession today.”

Mark Kemball and the alumni relations team are proud to count almost 34,000 dentists, nurses, physicians, researchers, technicians and other health professionals as OHSU alumni. The team strives to keep them all connected with the university, with its students and with each other.