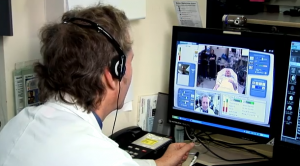 Last October, a 74-year-old woman was brought to the Mercy Medical Center emergency department in Roseburg with stroke symptoms. Mercy Medical’s Brent Crabtree, M.D., called OHSU and requested a telemedicine consultation. Minutes later, an OHSU stroke neurologist was examining the patient using a two-way audio-video robot that had been wheeled to her bedside.

The exam showed the patient had suffered a stroke. Working with Crabtree, OHSU’s Hormozd Borzorgchami, M.D., prescribed t-PA – a clot-busting medication that can minimize brain damage and make a significant difference in how quickly and completely a patient recovers from a stroke. The patient was transferred to OHSU, where interventional neuroradiologists removed the clot using the most up-to-date stroke treatment technology. And because our physician – working in concert with the Mercy Medical Center physician – had already examined the patient and done lab tests, she was taken to stroke treatment as soon as she arrived. She’s made a remarkable recovery.

Such success stories are being repeated throughout Oregon thanks to the OHSU Telemedicine Network. Since adding stroke to the list of telemedicine specialties we offer in spring 2010, OHSU has helped our collaborating hospitals treat more than 200 patients who presented with stroke symptoms – most in rural areas where hospitals cannot afford to have stroke neurologists on staff.

With stroke, time is brain. For example, t-PA must be administered within three hours to be effective.  At the same time, t-PA can cause significant complications for certain patients. It’s critical to bring the right expertise to the patient’s bedside as quickly as possible to make that determination.  OHSU’s tele-stroke team is available 24/7/365. That’s means we can be at the patient’s bedside in five to 10 minutes, helping to make treatment decisions, including the use of t-PA.

In addition, some 46 percent of the patients examined by way of our tele-stroke network were able to receive care in their home community. Overall, the OHSU Telemedicine Network has spared Oregonians more than $1.5 million in risky, expensive and unnecessary transports.

Stroke is the third leading cause of death in the United States and the leading cause of adult disability.  Telemedicine allows emergency room doctors throughout the region to have a backup – a second opinion – to help reverse this trend. It’s one more way the OHSU Telemedicine Network helps Oregonians receive the right stroke care, in the right place at the right time. 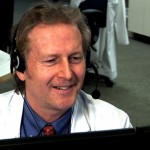 Wayne Clark, M.D., is the director of the Oregon Stroke Center at the OHSU Brain Institute. Dr. Clark received his medical degree from Oregon Health & Science University and completed his neurology residency and stroke fellowship at the University of California at San Diego. Dr. Clark`s clinical interest is in the acute treatment of stroke, including the investigation of new potential stroke therapies.