Most everyone knows how important it is to seek immediate medical attention if you are experiencing stroke symptoms. Clot buster medications (TPA) are most effective when given within three hours of a stroke and newer clot removing devices (stent retrievers) are approved for use up to eight hours after known stroke onset.

However, patients and families cannot always get to the emergency room in time. Examples include if the stroke occurs while they are asleep or if they are found with stroke symptoms and are unable to communicate when the stroke started. In these situations, we have always used the time when the patient was last known to be normal to guide the treatment plan. This means that these patients usually arrive at the emergency room long after we are normally able to treat them.

New advances in brain imaging may be changing these strict time limits. Using a special brain CT or MRI perfusion (CTP or MRP) scan allows us to see how much of the brain is already too badly injured to save (core area) and how much is not getting enough blood but might still be saved if treated (low blood flow area). If the area of low blood flow is larger than the core damaged area, treatment might still help the patient regardless of how many hours have passed since the stroke occurred. 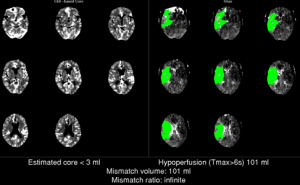 Last month, the OHSU Telemedicine Network treated a stroke case that demonstrates how advanced imaging may expand the stroke treatment window. A 84-year-old previously healthy woman was brought to the Salem Hospital emergency room with stroke symptoms. Salem Hospital’s Timothy Edelbute, M.D., called OHSU and requested a tele-stroke consultation. Minutes later I was able to examine the patient and talk with the family using a two-way audio-video robot that had been wheeled to the patient’s bedside.

The exam showed the patient was suffered a stroke on the right side of her brain. She was unable to move her left side and had slurred speech and vision problems. The patient was unable to say when the stroke happened. Her family found her on the floor at 7 a.m. But they had last seen her acting normally at 11 p.m. the previous evening. It was, therefore, more than ten hours since she was known to be normal. She was far beyond the three-hour window for the standard clot buster treatment – t-PA.

The decision was made to transfer the patient to OHSU’s neurologic critical care unit for close observation and evaluation. I discussed using our new CTP imaging with the family 0to determine if we might still be able to treat her stroke and they gave permission for us to proceed. Her CTP is show below:

The pictures on the left show in bright pink the “core” area of brain than is likely irreversibly damaged. In this case there is no area that showed up as pink!

The pictures on the right show in green the area of the brain that is not getting enough blood flow. This large area is at risk for dying if blood flow is not restored. Since the area at risk was large and the damaged area small, we treated her with our new clot removal stent retriever technique.

We successfully removed a large blood clot from the main artery to the right side of her brain (internal carotid artery) at 1 p.m., which was 14 hours after she was last known to be normal. By the next day, she was fully recovered. The brain CT scan 24 hours later showed no evidence that she had had a stroke!

I just saw her for a one month follow-up exam and she is back living her very active life. Interestingly, she doesn’t remember much about the stroke treatment procedure but does remember talking to me on the “TV screen in Salem”.

Wayne Clark, M.D., is the director of the Oregon Stroke Center at the OHSU Brain Institute. Dr. Clark received his medical degree from Oregon Health & Science University and completed his neurology residency and stroke fellowship at the University of California at San Diego. Dr. Clark`s clinical interest is in the acute treatment of stroke, including the investigation of new potential stroke therapies.