Thousands of donors in Oregon and beyond have responded to Nike Co-founder Phil Knight and his wife Penny’s fundraising challenge by giving more than $86 million to date in support of OHSU’s ambitious two-year, $1 billion campaign to revolutionize early cancer detection and treatment. We are thankful to all of our donors for their support. Here are some of their stories.

Second grader honors her grandfather – and everyone sick with cancer.

Genevieve Olson Rocha, age 8, raised a $1000 by making and selling approximately 100 rainbow bracelets to family and friends in honor of her grandpa, who is undergoing cancer treatment at OHSU. 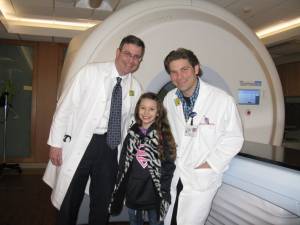 What could be more “Oregon” than beer, wine and coffee? Curing cancer.

Full Sail Brewing Company is an independent, employee-owned company that puts its hops where its heart is. Talented employee-brewers are invited to craft a special beer and then designate a worthy organization to receive a portion of the sales proceeds. Read more about this year’s philanthropic brew.

Dollars to doughnuts, these kids are with us.

Every penny counts in our fight – and a recent gift from students at Portland’s West Hills Montessori School came in the form of dollar bills, rolled quarters, and loose change in a shoebox.

Location scouts for NBC’s Grimm discovered the perfect house for their “Mommy Dearest” episode: a Portland home with a giant weeping cherry tree owned by OHSU employee and longtime supporter Ann Skoog. NBC offered to pay Skoog’s family to vacate the house for three days, putting them up at a hotel while the crew took over the block for late-night filming. Instead, Skoog asked the production company to tally the amount they would have paid for the location fee and donate the money to the OHSU Knight Cancer Institute. 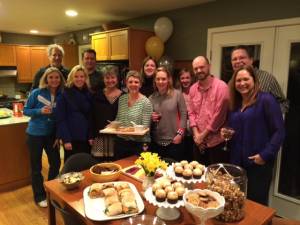 Nike employees aren’t just letting their company’s co-founder do all the work. In February, they launched the Nike Meet Cancer Supper Club, a brilliantly simple fundraising opportunity that is uniting the global Nike community from Beaverton to Brazil. Employees provide the menu, the venue and the vibe. Catered dinners, virtual dinners, raffles of baked goods, pizza parties—anything goes.

Young actor takes on the role of philanthropist.

After watching a close family member’s experience as a patient at the Knight Cancer Institute, eleven-year-old Olivia Gieselman decided to donate the proceeds (so far more than $5,000) from her role in a TV commercial.

“A campaign is like building a building,” says Wayne Drinkward, long-time OHSU supporter and president of Hoffman Construction Company. “You have a vision, but it doesn’t work until you get the right people together and stick a shovel in the ground. So that’s what I chose to do: create a challenge here that sticks a shovel in the ground and just start raising money.” Learn how Drinkward and his team raised more than $1 million toward our quest to end cancer.