Last November, Amelia Corwin was on a flight back to Portland after a trip to Florida when a flight attendant’s voice came on the intercom.

“Is there a doctor or nurse on board?”

Amelia, a Certified Nursing Assistant (CNA) at OHSU’s ambulatory surgery center at CHH, sprang into action. Below, she shares her experience in her own words. 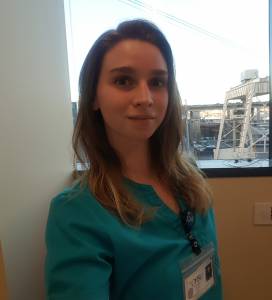 We had just taken off and were about 20 or 30 minutes into the flight when I heard a commotion. One of the flight attendants ran to make an announcement requesting help from medical personnel. When no one responded, I announced that I was a CNA and knew CPR.

The crew accepted my help and I ran to see what was going on. When I got to the passenger’s seat, I saw a young woman who had turned a deep blue color. She didn’t have a pulse, she wasn’t breathing and she’d been foaming at the mouth until she lost consciousness. It was obvious to me that she had had a seizure – I used to have them when I was younger, so I’m very familiar with the symptoms – and that she had been without oxygen for a couple of minutes.

At this point, I yelled for people to clear the area so I could perform CPR. They helped me get her out of her seat and on her back in the aisle of the plane. Another passenger (a nurse) started compressions while I monitored the unconscious woman’s airway and continued to check for a pulse. I felt it come back after about a minute, and I saw her start breathing on her own. She began coughing and gurgling a bit, so we turned her on her side to clear her airway.

Once we returned her to her back, we placed an oxygen mask on her. The crew had given me the headset so I could directly communicate with the air traffic controller. I took her pulse several times to get a baseline and reported her vital signs, though we were unable to get a blood pressure reading due to background noise on the plane. She started to get feverish, so I assisted her with removing her sweater and getting a bag of ice to place on the back of her neck and on her chest. After she returned to a normal temperature, we got her sitting up and eventually she was able to return to her seat.

The nurse and I both sat in close proximity to the woman while our plane turned around and touched down in Kansas City, where EMS boarded the plane and took her to the nearest hospital. At this point, the young woman had recovered enough that she was able to walk off of the plane with the responders. I hope she was able to receive good care at the hospital she was taken to, and that she’s doing well today!

This experience was unlike any other that I’ve had. I know now that working here at OHSU and working toward becoming a physician assistant is without a doubt what I’m meant to do.