“She’s still here with me.”

When we sat down with Joe and Jodi Whitton to discuss Jodi’s lung cancer journey, the conversation quickly turned to their 48 years of life together. In celebration of Valentine’s Day, we thought we’d share a piece of their story.

Joe and Jodi met as teenagers – about six months before Joe left for Vietnam. A blind date led to a game of checkers and the rest, as they say, is history. After hearing the Texan say “thank you ma’am” for the first time, Jodi was smitten.

Unable to afford a traditional wedding and anxious to get married before Joe was deployed, they hurried to the courthouse. Divorce Court was in session but the judge agreed to marry them anyway. About two dozen people were in attendance (all getting divorces), but the young couple didn’t mind. After the brief ceremony they split a steak dinner and Joe shipped off that night for Vietnam.

Our conversation was filled with anecdotes from a life together. Like how Jodi wrote Joe a letter every day for 14 months while 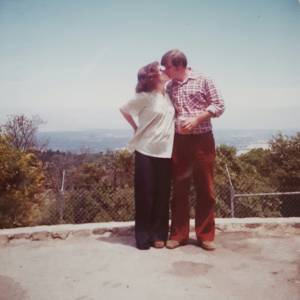 he was in Vietnam. And how when Joe was stationed in Alameda, California he’d sneak off the boat each night to see her. Or the time a hospital accidently gave them “the Ferguson baby” and sent their daughter home with the wrong family. (They were reunited several hours later)

In between our interview questions, Joe was attentive to Jodi, checking to make sure she was comfortable and that she was taking in enough oxygen. “He does everything for me,” Jodi smiled.

The Whittons moved to Oregon in 1979 to raise their family. Joe worked for Boeing and Jodi was an interior designer. Today, the couple enjoys retirement with their four grown children and five grandchildren who live close by.

And after 48 years together? “We’re about halfway there,” Joe said with a grin.