No time to get scared

In December 2014, 65-year-old Lila Newman was enjoying an active retirement after working for 45 years as an office manager. She and her husband, Robert, had recently returned home from a sightseeing trip to Europe and were preparing for another holiday season surrounded by family and friends at their home in Oregon City.

Lila had experienced some unusual symptoms that summer, but she chalked them up to normal signs of aging. After these symptoms persisted, she scheduled an appointment at OHSU for what she assumed would be just a few tests. It was during this visit that Lila was diagnosed with acute myeloid leukemia (AML) and admitted to OHSU. That was Friday, December 14. By Monday morning, Lila was already undergoing chemotherapy.

“I had no time to get scared,” she said.

Lila soon learned that she would need to undergo a bone marrow transplant. 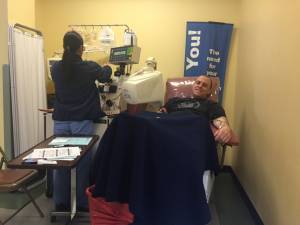 Lila’s three sisters were first tested for a genetic match, and after they came up negative, Lila turned to the national bone marrow registry. She discovered she had a “perfect match” – a 32-year-old police officer working in the Manhattan district in New York City.

John Mohrman had signed up for the registry years earlier while he was a college student – a close friend of his was undergoing treatment for leukemia, prompting John to join the registry. Ten years had passed and he was now a new father working as a police officer and volunteer firefighter. When John got the call and learned he was a match and had the opportunity to give life to someone across the country, he didn’t hesitate.

“It wasn’t even a question,” he said.

On March 24, 2015, Lila’s donor marrow arrived by FedEx. She remembers asking her care team for some time to be alone in the room with the marrow.

“I invited it into my body,” she said.

A place for healing 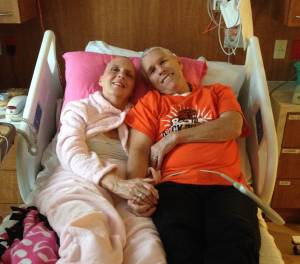 Lila’s home is typically bedecked for the holiday season, so they brought the holiday spirit to the hospital instead: Her daughter decorated the hospital room on 14K with white twinkle lights and inspirational verses.

Lila says she saw a new side of her husband, Robert, and that her relationships with her three adult children deepened as a result of her experience with cancer. Robert spent all 65 nights by Lila’s  side in the hospital.

“This is really an incredible journey we’ve been on,” Robert said. “You do what you have to do – it’s a labor of love.”

Lila is also grateful for the quality of care she received on 14K.

“I thought of the nurses as angels,” she said.

She also remembers with fondness the members of her care team, food services and housekeeping, who noticed when she was feeling down and made it a point to spend time with her. She calls Dr. Rachel Cook, her oncologist, “an amazing woman,” and remembers “the best nurse EVER,” Jackie, decorated her hospital room door every time Lila had to return to OHSU for care.

Following the transplant, Lila’s health returned fairly quickly. Today she marvels at the fact that by August she was well enough to attend a wedding in San Diego.

“You’ll know you’re well when you can do everything you did before and nothing hurts.”

Lila sought opportunities to make a difference even while she was going through her own treatment. “You can still make a difference in other people’s lives – even in the midst of your own personal crisis,” she said.

Today, Lila is healthy, strong and full of life. Her daily life has all but returned to normal, except Lila has found a new calling as a result of her experience: mentoring other women experiencing cancer. She says cancer helped her discover who she is.

“It opens your heart and gives you empathy for everyone who suffers,” she said.

Lila and John stay in touch frequently and she considers him a part of her family. She looks forward to the chance to meet him in person so she can thank him face-to-face for giving her back her life. 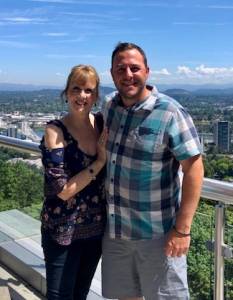 Since the bone marrow transplant, Lila, John and their spouses kept in touch, eventually planning to meet in person.

That day has now arrived: On Aug. 2, 2018, Lila and Robert waited outside security at Portland International Airport to hug John and his wife Taryn before whisking them away on an action-packed weekend, which included a trip to Timberline Lodge at Mt. Hood, a garden party where John and Taryn met Lila’s family, friends and care providers and, of course, a trip to OHSU.

“It was wonderful to put my arms around him and look up into his eyes and realize, ‘this is the man that saved my life.'”

For thousands of critically ill blood cancer patients, there is a cure. For Lila, it was John. For someone else? It could be you. Learn how you can join the bone marrow registry!