Meet this month’s recipients and learn why they were nominated below!

Megan Fitzsimmons, CNA, 4North
I can’t say enough good things about Megan! She acted as a sitter for two consecutive days on our unit, sitting with an autistic and developmentally delayed teenage boy whose family was unable to be here. The patient was slow to warm up to caregivers and participate in care, but Megan bonded with him immediately! She engaged him in all his care – she found fun activities for them to do together, sought out extra toys that corresponded to his favorite movies, took him on small field trips and ate her lunch in the room with him so he didn’t have to eat alone. She did it all with a smile on her face. You could see the patient’s face light up when she came in the room – it was wonderful to see. Megan went above and beyond in her care. It was a privilege to work with her and see her bond with the patient. The patient’s mother was sad that she couldn’t be here with her son and when she found out he had bonded with Megan, and that Megan would be back for a second day, she was overjoyed and expressed immense gratitude. The other RNs and myself working these last two days have been beyond impressed with Megan’s professionalism and huge heart, and can’t think of someone more deserving of being recognized with a ROSE Award.

Brenden Knight, Health Unit Coordinator, Pediatric ICU
Brenden is one of our fantastic Health Unit Coordinators in the PICU. After a busy Saturday working his shift, Brenden volunteered to work past shift change because of an emergency and code resuscitation for one of our young, critically ill cardiac patients. Not only did Brenden stay late to help with the coding patient, but he also anticipated that the patient would need extracorporeal membrane oxygenation (ECMO). He had the ECMO activation list and emergency page typed out on the computer and waited for the go-ahead from our PICU intensivist to send the page. Brenden had the foresight to anticipate the next steps for this patient and went above and beyond to minimize delays to activate ECMO. His teamwork and dedication are truly remarkable, and we are proud to have him as a member of Team PICU.

Robert Rope, M.D., Assistant Professor, Nephrology
A patient was in the Emergency Department for symptoms related to her end-stage disease. Unfortunately, the patient had acutely declined over a week and was needing to move to hospice earlier than expected. The patient had no family available to be with her. Dr. Rope, a member of the patient’s nephrology team, came and sat with the patient during her stay. He was able to advocate for her and discuss what ultimately was a very scary transition for her. I could tell the patient was reassured by his presence and the opportunity to discuss the coming plan with an actual member of her care team. Despite it being a busy Monday, Dr. Rope stayed with the patient at her bedside for quite some time and was incredibly calming and patient. Having this type of support brought at least a small amount of light to an otherwise uncertain time for this patient. 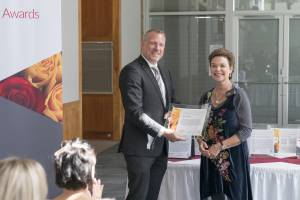 Jan Crider, Child Life Specialist
We had a very difficult situation today in the Pediatric Emergency Department, in which a pediatric patient passed without any family around. Contacting the family was difficult and prolonged due to them being out of cell phone range. Jan came to our department and assembled a bereavement pack for the family, taking her time and making every possible gift for them to cherish. When she was done she spent hours just sitting and holding the patient because she did not feel right leaving the patient alone. Jan went above and beyond without being asked. We are so grateful for Jan and all her expertise as a Child Life Specialist. Thank you, Jan – you made an impact and a difference today. 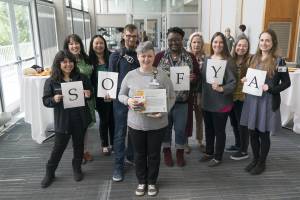 Sofya LaRocque, IIT & VA Project Manager, OHSU Knight Cancer Institute
I was walking down the OHSU-VA Skybridge with Sofya when we noticed a woman on crutches, breathing heavily in distress. Sofya immediately stopped and asked the woman if she was okay. She expressed she was trying to get to the Emergency Department, and Sofya jumped into action. Calm and collected, Sofya instructed me to run to the phone and call for help, and bring a chair on my way back. Sofya stayed with the woman, asking her various questions. Before I returned with the chair, the woman lost consciousness and Sofya broke her fall. She had a seizure and Sofya stayed calm, held her head, and kept her stable. When the EMTs arrived, Sofya was able to inform them on pertinent details since she had talked to the woman about how she was feeling. While I was in a bit of a panic, Sofya took control and was able to instruct me, as well as another passerby, on what to do to help. She was incredibly caring and watchful. This had a massive impact on me – moving forward, if I am in a situation like this on my own, I will ask a person in distress if they are okay. I truly came back to the office thinking, “Wow, what a role model!”

Sahar Rosebaum, M.D., Assistant Professor, Radiation Oncology, Knight Cancer Collaborative
I am nominating Dr. Rosenbaum for her recent intervention with her patient at the Columbia Memorial Hospital-OHSU Knight Cancer Collaborative in Astoria. Dr. Rosembaum’s patient not only required treatment for breast cancer, but had also recently been separated from her husband who was moved to a memory care facility for his early onset dementia. The patient, a world-renowned violinist, could not play her music during treatment because of the placement of her port-a-cath. She was separated from the greatest loves of her life – her spouse, and her music – which led to depression. After the port was removed, the patient was eager to play again, but she had no professional bookings and her depression lingered. Dr. Rosenbaum, recognizing that playing music was a core part of the patient’s identity and vitality, suggested that she play her violin at the Cancer Collaborative. This proved to be a turning point for the patient, who returned home to practice joyfully. Not only did she feel alive again, but in turn she touched the lives of other patients in the clinic, providing them with the joy of music and the inspiration to continue their own healing journey, back to what they love most. In an article written about this event, the patient stated, “I’d like to close the chapter with my sincere gratitude to Columbia Memorial Hospital and the CMH-OHSU Knight Cancer Collaborative for going the extra mile – caring for not just the patient’s body, but for the heart, mind and soul, as well.”

Catie Trausch, R.N., 14K Bone Marrow Transplant
I was rounding on a patient on 14K when I noticed a signed baseball on his window ledge. On inspection, I noticed the ball was signed by a 14K R.N., Catie. I asked the patient and their family about it and they told me that Catie had cared for this patient for several shifts and mentioned she would be off for a few days. She said she was going to a Mariners game and the patient asked her to catch a ball for him. While she didn’t catch a ball, she did go down to the dugout and asked the team for the game ball – and they gave her one! She brought the patient the ball next time she worked, and even signed it! This is an awesome example of a nurse going above and beyond to do something really special for a patient. Thank you, Catie! 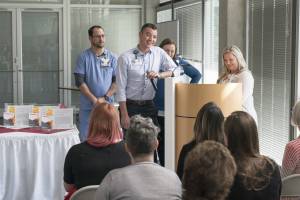 Team award: Andrew Keller, PAS Supervisor, and Amauris Regalado, Medical Assistant, Dermatology
This evening Andrew and Amauris saved a patient’s life. Andrew was about to leave for the day when he found a woman crying about to go on the balcony. He asked her if she was okay and when he realized she only spoke Spanish he called an interpreter. The interpreter told Andrew that the woman came up to the 16th floor to jump off and end her life. Andrew sent me a message to come help him. I ended up grabbing Amauris to talk to her while Andrew called Public Safety. The woman was actively trying to get past Amauris to get to the balcony so he escorted her to a room where he kept her talking until the police arrived. It turns out the woman was schizophrenic and off her meds. She heard voices telling her to harm children so she wanted to end her life before she caused any harm. The woman ended up needing to be sedated and strapped down while escorted to the ED for evaluation. The whole ordeal lasted an hour and both Andrew and Amauris were extremely calm and compassionate the whole time. Even the EMT commented on how great everyone handled the situation. It was heartbreaking yet beautiful to witness the teamwork and composed manner in which they handled the situation today. I’m so proud and grateful to work with such compassionate human beings.

Know someone at OHSU who deserves recognition? Nominate them for a ROSE Award!

One response to “Congratulations to the September 2019 ROSE Award recipients”