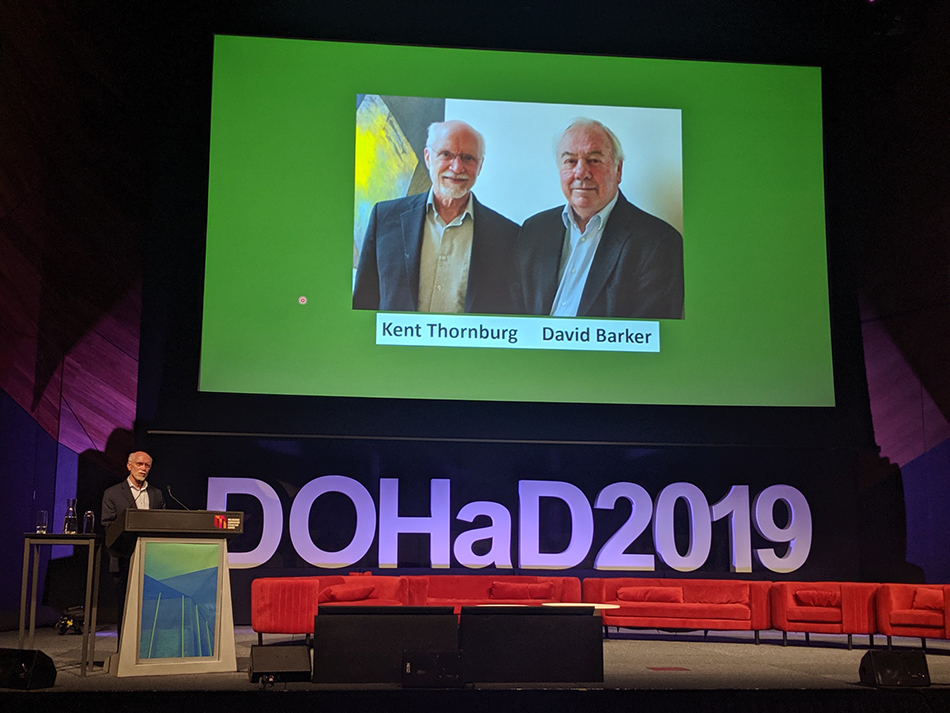 The International DOHaD Society awarded Kent Thornburg, Ph.D., its highest honor, an award named for his late friend and colleague David Barker, M.D., Ph.D., FRS.  Dr. Thornburg is a professor of medicine, OHSU School of Medicine, and director of the OHSU Moore Institute for Nutrition & Wellness and Center for Developmental Health.

OHSU’s place as an international leader in the field of Developmental Origins of Health and Disease, or DOHaD, is a direct result of Barker’s pioneering work and his and Thornburg’s decades-long collaboration.

In 1988, at a small scientific meeting in Italy, Thornburg ended up seated next to Barker at dinner. Barker was developing a radical new hypothesis stating that the environment before birth had an impact on an adult’s risk for dying from heart disease. At the time, Thornburg, a developmental physiologist, was researching how the placenta impacted the development of the heart. It was a natural entry point to Barker’s work. However, as Thornburg states “I knew of no biological mechanism by which David’s ideas could possibly be true.”

When Barker asked him to collaborate, Thornburg agreed with the caveat that he believed Barker’s hypothesis to be wrong and that their work together would show that. This was the beginning of a prolific working relationship and deep friendship that would last until Barker’s unexpected death in 2013.

Additional records in multiple populations and time periods continued to uncover links between low birth weight and later life heart disease, as well as many other chronic diseases. Within a couple of years, Thornburg admitted that Barker’s initial ideas had to be correct.

They went on to work together and separately to identify epigenetic mechanisms that influence how genes are expressed based on environmental exposures during pregnancy and the first years of life, a time period now known as the first 1,000 days. These epigenetic changes and the impacts of the same environmental exposures on the growth and development of the fetus sow the seeds for chronic disease risk.

Eventually, Thornburg convinced Barker to split his time between University of Southampton and OHSU to more closely collaborate. “We would have long, in-depth conversations about science,” said Thornburg, “David had an insatiable curiosity and the deepest understanding of the biology behind chronic disease. He had more ideas than anyone could ever explore in one lifetime.”

Together they published over 30 scientific papers, significantly contributing to moving the DOHaD work from concept to established science. Their collaborative discoveries set the stage for the explosion of research that has happened since.

However, working in a lab and speaking to fellow scientists was never enough. Both Thornburg and Barker felt keenly that they had a moral obligation to share the implications of this science with the communities most impacted by it. This conviction led to the development of the OHSU Moore Institute for Nutrition & Wellness.

The Moore Institute works to translate DOHaD science into educational resources, programs and policies that improve community health. They also work to ensure the next generation of scientists, health care providers and public health professionals has an understanding of how chronic disease begins, and their role in preventing it from taking hold.

As mentioned earlier, Thornburg is the director of the Moore Institute as well as the Center for Developmental Health (CDH) within the Knight Cardiovascular Institute. CDH is an interdisciplinary group of more than 60 scientists leading research into how fetal development impacts the programming of chronic disease risk.

Together, these groups are a leading voice in the latest DOHaD science and its implications as a foundation for community health. Their combined efforts work toward supporting OHSU’s mission to improve the health of all Oregonians.

Without the bold vision of Barker and that fateful dinner, Thornburg’s career might have taken a much different trajectory. Now, he has a medal with his dear friend’s image on the shelf beside him as he continues to explore how our earliest environment impacts our later health and how we can ultimately halt the rise in chronic disease rates across the globe.

The David Barker Medal is the International DOHaD Society’s highest honor, awarded every two years to a scientist who has made an outstanding contribution to the scientific development and broader leadership of the DOHaD field.