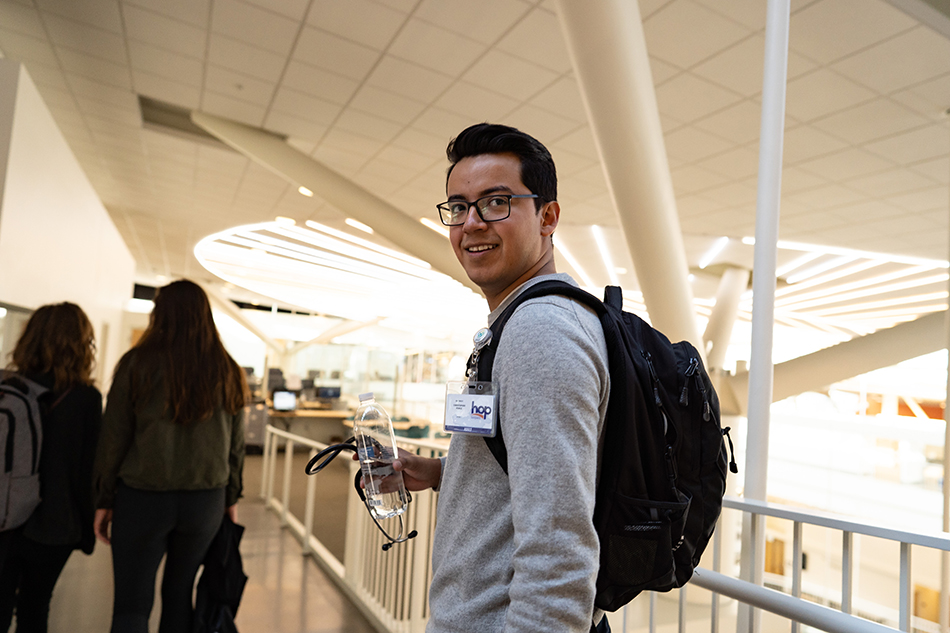 DACA student Christopher Ponce Campuzano starts medical school with hard work and determination. He hopes to become a pediatric oncologist or pediatric cardiologist caring for underserved children in the U.S.

Christopher Ponce Campuzano was born in a small fishing town on the Pacific Coast of Mexico. His parents made tortillas; his dad also worked in the fields. It was a simple life, he said, without many opportunities.

He was four years old when his parents decided to move the family to the U.S. in search of a better life for their children.

They started out living with an aunt in Austin, Texas, six people in her one-bedroom apartment. His dad worked construction; his mom cleaned houses. At night, his parents worked janitorial jobs.

In school, Ponce Campuzano fell in with other kids seeking belonging and status through gangs and fights.

“I wasn’t a good student,” said the first-year M.D. student. “I failed classes. I didn’t care if I finished high school.”

But his parents persevered. They moved to a new neighborhood with a school specializing in science, technology, engineering and math (STEM).

At school, a staff member took notice of Ponce Campuzano and steered him into the robotics club; soon, he was making pals and developing bonds with teachers. Thanks to them, he realized it wasn’t lame to like math and science.

Today, Ponce Campuzano is the School of Medicine’s first Deferred Action for Childhood Arrivals (DACA) medical student. What began with robotics became a pursuit of medicine and public service. Ponce Campuzano is finding a way to not only fulfill his passion for science but also make a difference for families like his own and those from all backgrounds who struggle to access the health services they need.

Early one morning his senior year in high school, Ponce Campuzano was
watching CNN when President Obama announced the DACA program. Through DACA, qualifying undocumented immigrants who came to the
U.S. as children prior to 2007 are granted legal work authorization and temporary protection from deportation for a renewable period of two years.

He woke up his parents to share the news.

They said it sounded too good to be true. They feared answering the questions on the DACA form about how they had gotten into the country. They had always equated their safety with hiding.

Ponce Campuzano remained focused on the DACA path to legitimacy. During his first semester at Texas Tech University, Ponce Campuzano decided to submit a DACA application. But the process seemed overwhelming. So he approached a professor at Texas Tech’s law school for help.

“He said he’d do it pro bono if I’d let his students work on the application,” Ponce Campuzano said. “Since then, we’ve become amazing friends.”

When he was granted DACA status, Ponce Campuzano felt enormous relief and, for the first time, a sense of security. He didn’t have to hide anymore.

He was majoring in math and minoring in chemistry. Math – specifically fractal geometry – provided insight into biology. Fractal shapes are infinitely complex, just like the human body. He joined Texas Tech’s Undergraduate Research Scholars Program. One of his projects involved researching new treatments by applying a Vitamin D3 metabolite to breast cancer cells.

But he discovered he didn’t want to only perform bench research; he wanted to work with patients.

Thanks to DACA, opportunities opened up. He could finally take his first plane ride – to attend the Society for Advancement of Chicanos/Hispanics and Native Americans in Science (SACNAS) conference in Los Angeles.

That’s where he learned about OHSU’s Equity Research Program, sponsored by the Center for Diversity and Inclusion. He applied for a summer internship and was accepted in 2017.

During his OHSU internship, Ponce Campuzano researched the effects of social vulnerabilities on readmission rates at Doernbecher
Children’s Hospital, where he surveyed readmitted patients about their social lives at home and in their communities.

“I shadowed physicians during clinic and rounds,” he said. “Loved every
second.”

After graduating from college in 2018, he took a gap year to apply to medical schools and work at OHSU’s Novel Interventions in Children’s Healthcare (NICH) program as a pediatric medical interventionist.

Children are referred to NICH when their health is declining and if their social situation is complex. NICH provides families with a pediatric interventionist who offers 24/7 intensive support, skills training and case management.

One of his projects involved behavioral management with children with Type 1 diabetes. Successful diabetes care is challenging, especially for kids: They go from eating whatever they want to needing to prick their fingers four times daily and inject themselves with insulin. He’d set up weekly goals for them, providing contingencies to maintain routines.

Ponce Campuzano often put himself in the shoes of those he worked with, say colleagues.

“We had a child in dire need of medication, but didn’t have time to set up medical transport,” said Matthew Heywood, M.P.H., NICH clinical supervisor. “Christopher drove the family to the clinic. They had a taco truck, and while they were at the hospital, he worked at the truck for the day so the family wouldn’t lose any income.”

Carolyn Zook, Ph.D., M.S., program manager of M.D. advising, colleges and outreach, is Ponce Campuzano’s OHSU mentor. They met during his internship and stayed in touch. In December last year, Dr. Zook asked him to meet her at the Robertson Life Sciences Building. When he arrived, she told him he’d gotten into OHSU.

“I cried, right there in the lobby,” he said. “I was so happy. I called my parents, and my mother started crying. It was my grandmother’s birthday and also the Virgin Mary’s birthday, which is a big deal for her. I called my family in Mexico. Many of them haven’t been to high school or middle school or school in general. They were so excited when I told them I was going to be a doctor.”

“When I found out about the scholarships, I called my father and told him to take a day off work,” he said. “We didn’t have to worry about how we were going to pay for school. I’m so grateful.”

Dr. Zook said, “I admire his tenacity and that he didn’t give up, especially
given that he had no script for this. He’s figured out what he wants to do and how to make that happen.”

Even with DACA, obstacles remain. As an undocumented student, Ponce Campuzano’s activities are restricted. He can’t apply for credit cards. He can’t leave the country. He can’t get a loan unless a U.S. citizen co-signs on it.

The fate of DACA itself remains up in the air; the Supreme Court is reviewing it, though a decision will likely linger into the 2020 election season.

Ponce Campuzano understands he’s in a precarious position. “I know it’s a risk for OHSU to do this. The DACA program could stop anytime. That would mean med school would be where it ended for me.”

He’s grateful for the “all are welcome” message in 2017 from OHSU’s then-
President Joe Robertson and follow-up message clarifying OHSU’s commitment to DACA. (OHSU’s policy is to decline to share confidential student information such as immigration status or act on behalf of the federal government in enforcing immigration laws.)

“OHSU understands where I’m coming from,” he said. “And they gave me a chance.”

Ponce Campuzano is active in organizations dedicated to diversity in STEM and immigration reform. During a trip to Washington, D.C., last year, he was able to share his DACA story and discuss immigration issues.

There isn’t a day Ponce Campuzano doesn’t think of his family, he said. “They have been here a long time, but every day’s a risk. They can’t leave the house without the risk of getting stopped and questioned. It’s a part of life we’ve gotten used to, but doesn’t stop the threat of them being deported.”

It also means his family can’t fly to Portland to see him. “It was heartbreaking not having my parents at White Coat, after everything they’ve done for me,” he said.

But during a recent visit home, he announced he had a surprise. He reached into his backpack… and pulled out his white coat.

“They’d never thought they’d get the chance to see this,” he said. “This keeps me going. It motivates me.”

Since starting medical school, Ponce Campuzano has been pleased at the support from both faculty and students. Although being far away from home is difficult, the help and mentorship he finds here goes a long way, and he’s joined the Latino Caucus and the Latino Medical Association.

But what he’d really like to do is set up medical care options through OHSU to reach out to Portland’s Latino community, he said.

“There’s a huge barrier with medicine and the undocumented population,” he explained. “They’re trying to stay under the radar. Even questions like ‘Where are you from?’ can be overwhelming. They worry about raising suspicion, especially at massive hospitals that log everything. Many would rather just not go, or they’ll take whatever remedy they know from Mexico.”

In his precious free time, Ponce Campuzano explores Portland with new
friends. He’s enjoyed trying new foods around town and hiking near his Marquam Hill neighborhood and in the Columbia River Gorge.

Eventually he’d like to pursue pediatric cardiology or pediatric oncology. “Kids have always had the biggest impact on me,” he said. “Honestly, they are the most innocent and vulnerable. It’s so unfair to see them in the hospital. They deserve nothing but the best.”

One of Ponce Campuzano’s friends, Luis Diaz, is an M.D./Ph.D. student. They met during medical school interviews and discovered they both had parents from Mexico, although Diaz is a U.S. citizen.

“Not a lot of people have [his concerns] in their daily lives,” said Diaz. “Having those issues makes him a strong person.”

From robots to rounds, it’s taken a lot to get to this point in Ponce Campuzano’s journey. Despite the uncertainty, he remains dedicated to helping break barriers not only for him, but also for future generations.

“[Underserved] families deal with many demands on their lives,” said NICH Director Michael Harris, Ph.D., professor of pediatrics, OHSU School of Medicine. “But Christopher is steady. He is unflappable. That’s a critical piece in his success. I see him delivering medicine to those most challenged by their health. He’ll be an incredible physician.”

Working toward a diverse physician workforce

Yet schools are making progress. OHSU’s M.D. Class of 2023 is the most diverse in school history. Ponce Campuzano said he’s found that diversity in friends and colleagues, and he appreciates people’s willingness to reach out to one another, no matter what one’s background.

“I think that’s one of the coolest things with my generation. There’s less judgment. You can talk to who you want to and not worry. I believe our whole country is moving toward that, too – a lot more caring about and helping one another.”

This story first published in the fall 2019 issue of the OHSU School of Medicine Bridges alumni magazine.