UPDATE March 16 : The School of Medicine and the Kendall Family have cancelled the 3 p.m., April 17, Celebration of Life for Dean Emeritus John Kendall at the OHSU Auditorium in alignment with Dr. Kendall’s lifelong commitments to the health of the community. Dr. Kendall’s wife, Betty, and children John, Victoria and Kay have felt moved and grateful for the outpouring of interest and the desire to memorialize their beloved father and husband.

A distinguished legacy at OHSU

The OHSU School of Medicine announces with great sadness that John W. Kendall Jr., M.D. F ’62, dean emeritus and professor emeritus of medicine, died Dec. 11, 2019, after an extended illness. He was 90.

Dr. Kendall built a remarkable career in academic medicine and leaves behind a distinguished and lasting legacy at OHSU and the VA Portland Health Care System. He was a renowned endocrinologist and researcher, a strong and effective leader in both the school and the VA, recipient of numerous honors and accolades and a beloved husband and father.

Dr. Kendall was born on March 19, 1929, in Bellingham, Washington, and grew up in Seattle. He went to college at Yale, where he developed an interest in science, and graduated in 1952. He was drawn to medicine, though, after shadowing an uncle one summer who served on the University of Minnesota medical school faculty.

Dr. Kendall returned to the Pacific Northwest and earned his M.D. from University of Washington School of Medicine in 1956. He completed a residency in internal medicine at Vanderbilt University in 1959 and a fellowship there in endocrinology in 1960. He sought additional training in endocrinology at OHSU, completing another fellowship in 1962. For two years, he served as one of two endocrinologists in the U.S. Navy at the time, and in 1964 he joined the OHSU faculty and the VA as a staff physician.

His career blossomed, and over the next few decades, he honed an aptitude for leadership and administration. He served as head of the Division of Metabolism in the Department of Medicine, interim chair of the Department of Medicine and assistant dean for research in the Dean’s office, among other roles. At the Portland VA, he served as the associate chief of staff for the research program, which grew under his vision and guidance.

Dr. Kendall was appointed the school’s eighth dean in 1983 and served until 1992, during which time he made significant and lasting contributions. Among his key accomplishments was catalyzing curricular reform in the M.D. program, funded by the Robert Wood Johnson Foundation and launched in 1994. Taking a cutting-edge approach, educators placed students in clinical settings from day one – instead of after two years of basic science classes – to better support learning objectives and workforce needs. That, among other changes, helped the school earn national recognition for curricular innovation. 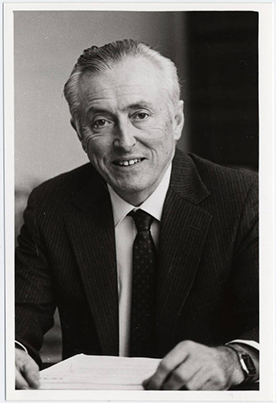 Another accomplishment was convincing Oregon Senator Mark Hatfield to direct federal funding for the construction of a sky bridge between the OHSU and VA campuses – an architectural feature that has fundamentally changed operations. Prior to that, patients were taken by ambulance from the OHSU Hospital to the VA, and faculty and students walked around the canyon to access buildings. The sky bridge now stands as an enduring symbol of the close, interconnected relationship between OHSU and the VA.

Dr. Kendall’s hallmark was building relationships on behalf of the school, said John Benson Jr., M.D., dean emeritus and professor emeritus of medicine, who succeeded Dr. Kendall as dean of the school. Dr. Benson noted that Dr. Kendall worked deliberately as dean to improve and strengthen relationships with the local medical community, serving as president of the Multnomah County Medical Society from 1991-1992.

“John was a generous spirit,” said Dr. Benson. “He was very thoughtful, and he always had a smile on his face. He would greet you with his hand out, and it was impossible not to shake it. That was his style.”

In addition to teaching, patient care and administrative roles, Dr. Kendall spent 20 years conducting basic research, investigating the physiological relationship between the pituitary and adrenal glands. He chaired the NIH Clinical Sciences Study Section from 1979 to 1984 and published more than 60 peer-reviewed articles, 95 articles and book chapters and 86 abstracts. 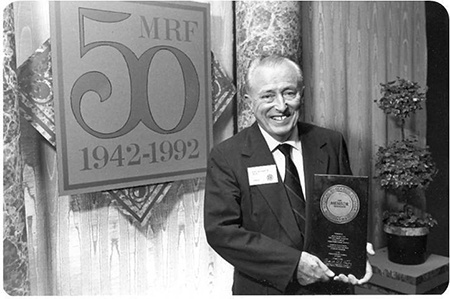 Even in retirement, Dr. Kendall stayed connected with the OHSU School of Medicine, serving as president of its Alumni Council from 2011 to 2012. He also taught a first-year class on physical examination, even borrowing a neighbor child to teach infant examinations.

“Dr. Kendall’s impact extends to generations of alumni who were enriched by his wisdom and good humor as dean, professor, colleague and friend,” said Mark Kemball, director of OHSU Alumni Relations. “The association was fortunate to benefit from his leadership as council president and from his guidance throughout his long and distinguished tenure at OHSU.”

In his free time, Dr. Kendall loved to hunt for mushrooms, fish, grow grapes, make wine, study art history and compete with his wife, Betty, to see whose tomatoes would ripen first.

The family held a private memorial service, and Dr. Kendall was interred at Willamette National Cemetery.

He will be remembered fondly by many in the OHSU and VA communities who had the pleasure of working with and learning from him.

The family kindly requests that donations in Dr. Kendall’s memory be made to the John A. Benson Jr. M.D. & John W. Kendall Jr. M.D. Visiting Professorship administered by The Foundation for Medical Excellence.

The professorship, which concentrates on medical education, was created in 1996 to honor these internist-educators for their exceptional contributions to the profession, to the school as deans and to the foundation, of which Dr. Kendall was a founding member and past president.