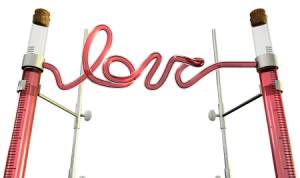 As Valentine’s Day nears, and we think about love and attraction, it’s tempting to think it’s all about longing stares and fluttering hearts and fate.

But beneath all of that, it’s really about … dopamine, norepinephrine, serotonin, oxytocin and vasopressin.

Because when we talk about “chemistry” between two people, we are also talking a lot about “brain chemistry.”

A couple of years ago, I was part of a special multimedia presentation, with Grammy nominated vocalist Valerie Day, that took a novel look at all of this, called “Brain Chemistry for Lovers.”

The brain chemistry sustains itself far beyond that first glance, of course.

Brain researchers have looked at functional magnetic resonance imaging brain scans of people who’ve been in love for seven months or so. The subjects were shown two photographs, one of a stranger and one of their beloved. When they looked at the picture of the stranger, there were no distinct changes in their brains. But when they looked at the picture of their mate, an area of their brains associated with reward and pleasure — an area that is home for the neurotransmitter called dopamine — lit up like a Christmas tree.  The neurotransmitters norepinephrine and serotonin may also work with dopamine to drive that infatuation phase of love.

Once the dopamine-serotonin-norepinephrine high wears off, what next? There’s a role for brain chemistry in long-term relationships and monogamy, too. Scientists have discovered that role through research on, of all things, prairie voles. Male prairie voles are monogamous – which is virtually unheard of in the world of rodents. They mate for life. The males take care of the offspring. And when a prairie vole dies, its mate rarely takes on a new partner.

And scientists have extended this research to humans. Researchers in Sweden found that men with a gene variant that makes them less responsive to vasopressin are likely to have more relationship problems with women than other men. And women who are with these men are much less satisfied with the relationships.

It might be early to call it “the divorce gene” — but it does raise some interesting questions about who is more or less likely to stay in a committed relationship.

So as you exchange those flowers and chocolates with your beloved tomorrow, remember this bottom line: Yes, it’s about your heart. But it’s a whole lot more about your brain.