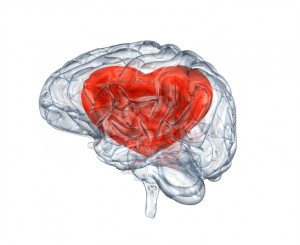 Neuroscientists have long wondered whether or not there’s a love locus in the brain; a spot where romance resides amidst the complex circuits and intricate chemicals that comprise our emotional nervous system. Recent studies have surprised us as neurologists; there is such a spot and, interestingly, it involves the nerve cells and neural circuits that drive us to crave food, water and even illicit drugs. And these are not the circuits that involve lust or sexual desire.

Recent studies support this love locus by demonstrating brain images in functional MRI scans. These specialized scans display pictures that capture the activity, not just the structure (as in regular MRI scans) of brain cells. Young, love-crazed college students were shown pictures of the objects of their affection while undergoing functional MRI scans. Behold, the parts of the brain that were activated when the students saw their love’s photograph were the areas that have a high concentration of dopamine, one of the brain’s key neurotransmitters.

Dopamine is a chemical that carries messages that influence reward, craving, and, also, drug addiction. So, in effect, these young lovers were truly “addicted” to one another, and, in fact, were found to have physically painful withdrawal symptoms when their fresh young love was thwarted.

But what about those of us long past the dizzying, delirious highs of a fevered, lovesick youngster? Actually, there is great news for those of us much farther into our relationships with the one we love. A recent study from Stony Brook University in New York demonstrated that some mature couples — who had been in love for years, even decades — still had the burst of frenzied activity in the dopamine pathways in the brain when they looked at pictures of their longtime lovers. Just as if they were college students. So no one can say that young love fades and passion wanes over time, at least not from a neurobiological standpoint!

Love does live on, but it also has many facets. I was particularly enthralled by a study from the University of Minnesota, whose researchers asked young men and women to make four lists: of their friends, the people they loved, the people they thought sexually attractive, and, lastly, those with whom they were “in love.”

The last list most often had just one name. But, consistently, that name was also on all the other lists. True love is a powerful force that embraces friendship, affection, sexual attraction and romantic impulse. It is as intoxicating as a drug. So this Valentine’s Day, I hope you appreciate the complex pathways in your brain that comprise those feelings you have of potent and enduring romantic love. Whatever your age, and however long you have been in love.

3 responses to “Your brain … in love”