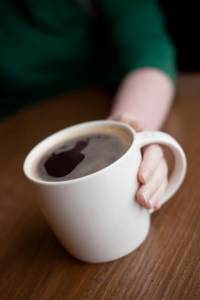 How much do Portlanders love their coffee? A lot. According to a 2011 poll by CNBC, Portland is the third most caffeinated city in the U.S., with almost 900 coffee shops and 30 local coffee roasters.

And does this love of coffee have any effect on brain health? A new study published in the journal Nature Neuroscience suggests that caffeine might actually be a good thing for how our brain stores and processes long-term memories.

Many studies have documented the positive effects of caffeine on attention and processing speed, which we are all probably familiar with from our own personal experiences. I’m usually happy with just one small cup of coffee with breakfast. But if I feel sleepy after a big lunch, sometimes I’ll indulge in a second cup to perk myself up for a busy afternoon or evening. Like most people, I usually think of caffeine as a little pick-me-up to give me the energy to tackle a task that I have to take on in the future.

In the new study by Daniel Borota and his colleagues, the researchers flipped the caffeine question around to ask: what if we give subjects caffeine after they perform a memory task? This is called a “post-study” design, and the researchers paired it with a randomized, double-blind, placebo-controlled experimental set-up. Randomized means that the 160 subjects were randomly assigned to the caffeine or non-caffeine (placebo) conditions. Double-blind means that in addition to the researchers not knowing which group each subject belonged to when they were collecting and analyzing the data, the test subjects did not even know they were going to be asked to perform a memory task. Experimental studies are designed with these features to reduce conscious and unconscious bias both in the test subjects and the researchers, so that the results and conclusions can be as biologically meaningful as possible.

There were two other important characteristics of the test subjects that allowed the researchers to conclude that changes in memory were associated with the caffeine given during the study. All the subjects consumed only small amounts of caffeine in their daily lives (even less then I drink!), and they were “caffeine-naïve,” meaning that they did not have any other sources of caffeine in their diet during the study.

The test subjects were shown a series of common, every day objects, and were asked to report on certain qualities of each object. After the test period, they were then given a moderate amount of caffeine or placebo. Twenty-four hours later, they were tested again, but this time they were asked to recall if the objects presented were different, similar, or exactly the same as the objects they saw the day before. Those who had received caffeine the day before were better at knowing the difference between objects that were exactly the same vs. objects that were similar to the previous day. The researchers concluded that caffeine given after the task had a significant impact on the subjects’ ability to consolidate and store long-term memories, specifically when it comes to distinguishing between similar but different objects.

Importantly, the researchers measured the amount of caffeine in the saliva of all subjects, and showed that there was no caffeine in their system on the second day, at the time of the memory task, indicating that caffeine did not affect the subjects’ ability to recall memories. Furthermore, when caffeine was given just before the memory task on the second day, there was no benefit, which shows that caffeine was not able to beef up memory retrieval.

Of course, we all have had the experience where too much coffee sends you into a jittery, counter-productive, can’t-sit-still-and-focus state. Along these lines, the researchers also report a dose effect in their study: 200 milligrams of caffeine produced the optimum effect, while 100 milligrams was not enough, and a higher dose of 300 milligrams did not significantly enhance the effect. To put that into perspective, a 16-ounce Starbucks drip coffee has about 330 milligrams of caffeine, while a 16-ounce latte has only 150 mg, and an espresso shot has about 75 milligrams.

As with most things, moderation is key. But perhaps a bit of caffeine right after your next big brain-demanding task will help you remember those important parts of your day.