This last March, I had the opportunity to join fellow neuroscientists from around the country in an effort to increase political awareness of scientific research during the Society for Neuroscience Capitol Hill Day in Washington, D.C. The group was made up of about 45 Society for Neuroscience members, including graduate students, post-doctoral fellows (like myself), faculty members, SfN staff and senior SfN leaders. Combined, we met with more than 75 congressional offices over the course of one day, with the goal of lobbying for support of neuroscience research nationwide. 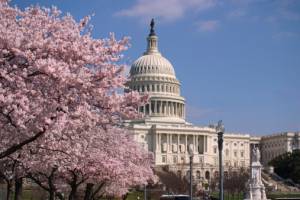 Our main goal for the day was to ask each office to support a healthy budget for the National Institutes of Health and the National Science Foundation. These two government agencies fund the majority of scientific research in the U.S., through grant money awarded to both young and established researchers across the country. These budgets are set by Congressional appropriations committees and voted on by all members of Congress — just like any other budget item (like military spending or Medicare). Did you know that your tax dollars directly pay for most of the scientific research in this country?

As a scientist who enjoys talking about my research, I found the whole experience energizing. My group and I met with congressional offices from Michigan, Minnesota and Oregon. Most of the time we meet with staff members, but we did have the opportunity to meet directly with Congressman Earl Blumenauer of Oregon, my congressman. Congressman Blumenauer has championed an effort on Capitol Hill to increase awareness and open discussion about the importance of neuroscience research through the formation of the Congressional Neuroscience Caucus.

So what did a group of scientists find to talk about with political staffers and elected officials? Each member of the group took the time to explain their particular research focus and the health implications of their findings. We talked about how the recent budget cuts due to sequestration have greatly impacted our ability to carry out meaningful experiments that will answer essential questions about brain health, disease and basic brain function. These budget cuts are no joke — labs are being shut down due to lack of funding, clinical trials are being suspended and young, frustrated scientists are leaving research to pursue different career paths.

Sharing our stories and asking our political leaders to restore NIH and NSF budget lines is one step in creating a vibrant national neuroscience research community. Engaging with the public to rally support for research is another essential piece of the puzzle. When I share my Hill Day experience with my colleagues at OHSU, many of them recognize the importance of increasing public dialogue about science research and funding, and they are eager to get involved as well. Many scientists just don’t know where to start. I am grateful for the opportunity to be involved with the Society for Neuroscience’s Hill Day this year, and I hope to participate again in the future.