In March, researchers conducting a study of older adults announced a blood test that could predict the onset of Alzheimer’s disease. Of course, the test is very preliminary and the testing process, itself, still needs more research.

So, what can you do to know to help stave off memory loss? What do you and your loved ones need to know about dementia?

Alzheimer’s and other forms of dementia often have something in common: they may co-exist with cerebrovascular disease. Cerebrovascular disease includes conditions such as hardened arteries or stroke that may restrict blood flow to the brain, and likely play a prominent role in age-related mental decline.

What can you do to help prevent cognitive decline as you age?

Unlike Alzheimer’s, cerebrovascular disease is preventable. Studies have shown that maintaining a healthy diet, blood pressure and cholesterol levels, and regular exercise early on may help prevent ongoing and sometimes silent damage to your brain that manifests itself later in life. 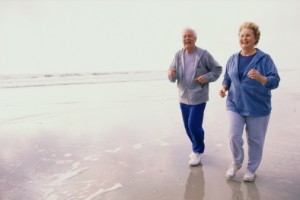 Any exercise is helpful, and something as simple as a 30-minute brisk walk three times a week can make a real difference. The most important thing is to get moving when and how you can. Getting older doesn’t necessarily mean getting Alzheimer’s. However, age-related changes in thinking definitely occur.

Those keys you’ve misplaced or an acquaintance’s name that’s escaped you? They can be part of normal aging. As long as it doesn’t interfere with what you need to do day to day, it’s probably fine. When someone has changes in thinking severe enough to affect the ability to do daily activities like taking medication or paying bills, that could be a sign of dementia.

Do a few memory lapses mean you could have dementia?

Who is most at risk for developing Alzheimer’s disease?

Women are at increased risk, primarily because they live longer. Hormones or genetics may also play a part, although this is still being researched.  Alzheimer’s also affects women more in that women often serve as primary caretakers.

We’re doing a number of studies on Alzheimer’s and other types of dementia, for prevention as well as treatment during all stages of the disease. By taking part in Alzheimer’s research, you could help yourself and others. For information about OHSU’s research studies on dementia and healthy brain aging, contact the Layton Aging and Alzheimer’s Disease Center.

Lisa Silbert, M.D., M.C.R. Dr. Silbert completed her neurology residency at UCLA and fellowship training in both Geriatric Neurology and Clinical Neurophsyiology at OHSU. Her research interests include the effects of subcortical white matter disease on age-related cognitive and motor slowing.

Deniz Erten-Lyons, M.D. Dr. Erten-Lyons is Assistant Professor of Neurology at Oregon Health and Science University. Dr. Erten-Lyons’ research focuses on understanding why some individuals age with minimal or no cognitive decline. She is interested in identifying genes which affect brain morphology and function in late life, and the role genetics plays in cognitive reserve.