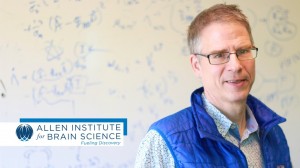 On March 9, he spoke at the Newmark Theatre as part of our 2015 Brain Awareness Lecture Series.

Here, he provides a brief summary of his presentation:

The aim of my life as a scientist is to understand how consciousness comes into the world! How is it that the human brain, the most complex piece of organized matter in the known universe, is capable of not only generating electrical activity and behavior but also has conscious subjective feelings, experiences the pains and pleasures, the sounds and sights of life.

To explain this we must analyze the brain – one of the two partners in the ancient mind-body problem – at the requisite cellular level in all of its vast complexity.

This is the goal of the Allen Institute for Brain Science in Seattle. Funded by the extraordinary generosity of Paul G. Allen, we embarked in 2012 on an ambitious 10-year initiative to characterize the structure and the function of the cerebral cortex. 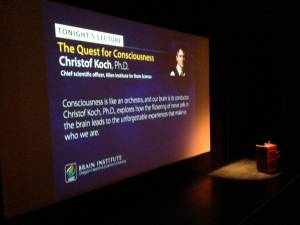 To accomplish this feat, we are taking a deep dive into vision and visual perception. We aim to provide a quantitative taxonomy of neuronal cell types and their interconnections, as well as how these cells connect to form a network.

Computer simulations will enable us to understand how neurons encode, relay and process information within those networks, and how function relates to perception, behavior and consciousness.

We will thereby be in a position to comprehend how mind arises out of matter and to better apprehend who we are.