Last month, scientists and clinicians in the Pacific Northwest spent three days sharing new discoveries, igniting collaborations, and discussing the future of neuroscience research at the NeuroFutures meeting in Portland.

Stimulating research talks covered advances in clinical technologies, such as deep brain stimulation for depression, retinal prosthetics, and advanced MRI imaging to study myelination, sleep, and ADHD, as well as basic science discoveries that are the building blocks for how we understand the cellular basis of brain function. 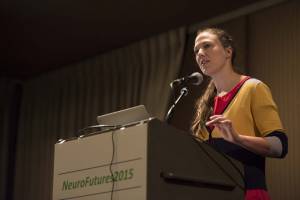 From tadpoles to rodents to non-human primates, many of the basic science speakers focused on tracking neuronal circuits, both anatomically and functionally, and pairing these data with specific behaviors or disease states.

This combination of basic and translational research, with a focus on technology development and whole-brain function, is precisely aligned with the goals of the White House BRAIN Initiative, which inspired OHSU, the University of Washington, and the Allen Institute for Brain Science to establish the annual NeuroFutures meeting in 2014.

In addition to the scientific and clinical talks, a section on Policies and Initiatives featured talks from Dr. Walter Koroshetz, director of the National Institute of Neurological Disorders and Stroke (NINDS), and Dr. Carlos Peña, director of the Division of Neurological and Physical Medicine Devices at the U.S. Food and Drug Administration (FDA).

Dr. Koroshetz shared updates from the BRAIN Initiative, including newly published discoveries from researchers that were awarded BRAIN grants through NINDS. 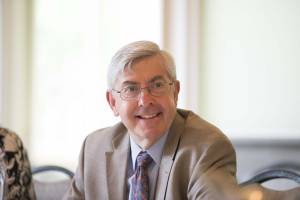 Dr. Peña gave an overview of the FDA approval process for neurological devices, encouraging researchers to contact his office early in the research and development phase, to learn what requirements are needed for pre-clinical trial data.

Other highlights from the meeting included a thought-provoking talk from Hank Greely, JD, who spoke about the ethical considerations that scientists and physicians should consider when working with neurodevices in patients.

This topic was complimented by panel discussions on neurodevices and biologics, where the general opinion was positive yet realistic about the current and future treatment options for patients with neurological diseases, from depression to Alzheimer’s Disease. 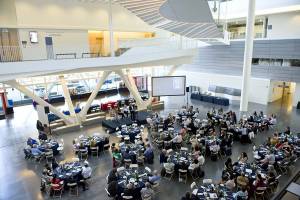 The scientific portion of the conference concluded with a workshop and tutorial on brain mapping tools from the Allen Brain Institute.

The final night of the conference featured an exciting “meeting of the minds” Neuroscience Town Hall. Congressman Earl Blumenauer (D-OR), Dr. Koroshetz, Dr. Mark Resnick, Professor and Advocate at the University of Illinois, Chicago, and Katie Sale, Executive Director of the American Brain Coalition took the stage to share their thoughts and perspectives on the BRAIN Initiative and the role of advocacy organizations in promoting neuroscience research.

Everyone in the group emphasized the need to consider neuroscience as a whole, in addition to thinking about individual diseases.

This theme translates well to the goals of the BRAIN Initiative: the development and integration of various technologies and experts from many fields, to advance the wide goal of understanding brain function in normal and diseased states.

In his opening remarks, Congressman Blumenauer praised the Pacific Northwest as an “ecosystem for innovation in research.”

The NeuroFutures conference as a whole perfectly echoed this sentiment, showcasing exciting advances in both clinical and basic neuroscience research, and a bright future for neuroscience in the Pacific Northwest. 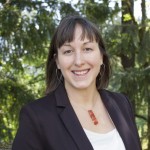 Kateri Spinelli, Ph.D. is a post doctoral fellow in the Department of Neurology.