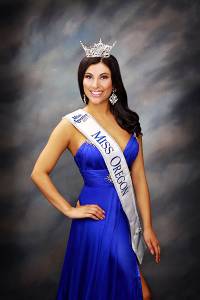 When I was a freshman in high school, I suffered a traumatic brain injury due to a cheerleading accident.

As someone who had no prior knowledge of brain injuries, it was difficult to understand what I was going through and why I felt so different during my recovery process.

Because of the adversities I overcame as a result of my traumatic brain injury, I wanted to advocate for this serious and often ignored issue.

After meeting with doctors and learning more about traumatic brain injuries, I got involved in volunteering and talking to students about my experiences and recovery process through OHSU’s ThinkFirstOregon program.

It was important to me to shed light on an overlooked issue that has not only affected me but so many others.

At the Miss America 2016 competition, I had the opportunity to represent the traumatic brain injury community with a national spotlight.

While at Miss America, I was overwhelmed with the support I received from the TBI community reaching out to me and being thankful for the attention I was able to bring to the issue.

With the constant messages, letters and phone calls from so many who were excited to hear that traumatic brain injuries were finally able to get their due, I realized one voice can really make a difference.

Donate to the OHSU Brain Institute
With your support, our scientists can decode the genetic mysteries of neurological disease and create a new standard of care for patients affected by autism, ADHD and other neurodevelopmental disorders.