There may be a joke out there somewhere about how ballroom dancing is hardly brain surgery, but Kunal Gupta isn’t likely going to be the person to make it. Instead, Gupta, a native of the United Kingdom, is actually someone with an affinity for and a connection to both brain surgery and ballroom dancing.

Now in his fourth of seven years as a neurosurgery resident at Oregon Health & Science University, Gupta, MBChB, PhD, grew up in Birmingham, England, where he took a fair amount of acting classes. To complement those, his parents also enrolled him in a few dance classes at a local recreation center.

Though he never fully dove into the pastime as a youngster, the exposure to dance did leave an impression. 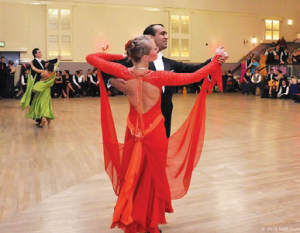 “It was just one of those experiences that kind of stuck with me,” said Gupta, now 32. In fact, it stuck with him so much that when he arrived at the University of Cambridge for medical school, Gupta decided to try out for the Cambridge University Dancesport Team.

Gupta didn’t make the first team on his first try, but a year later he did, which set the stage for his enjoyment of competitive ballroom dancing to take off.

“It’s not so much fun when you’re a 12-year-old kid,” Gupta said, “but it gets much more interesting when you’re an adult.” As part of the team at Cambridge, Gupta built up his dancing deftness and moved his way up in the ranks.

While studying for a time in Edinburgh, Gupta wanted to keep his dancing sharp and needed to find a partner. He found one in a young researcher and dancer who also happened to be studying in Edinburgh just two labs away from Gupta.

The two began dancing together and, eventually, they married. “It’s funny, but it’s how I met my wife,” Gupta said.

In addition to his wife, Gupta danced with many different partners while he competed at Cambridge and in a few amateur competitions. He described the competitions as “these amazing round robins” where 20 different couples all dance and are judged at the same time.

“You spend half the time trying to dance and half the time trying not to trip over or run into everyone else around you,” he said. “It’s really fun.” Gupta also said he enjoys the music that accompanies ballroom dancing — plenty of big band music from the 1920s and 1930s — and the social interaction that dancers share.

In addition, he said that at Cambridge, many of the dancers were in fields more closely related to science than, say, the humanities, so there has been that connection for him as well.

“There are a lot of technical steps involved to do it right, so I think that is very appealing,” Gupta said. When he was competing, Gupta and his partners did fairly well, winning some competitions or at least making a solid showing.

At the more advanced level, however, Gupta said it’s hard to compete against people who have been dancing seriously since they were children. “You can’t compete with that,” he said, “but it’s an honor to be dancing beside people who are that good.”

Though Gupta and his wife, E. Jolanda Muenzel, MD, PhD, a post-doctoral fellow in neuroscience at OHSU, still dance occasionally, they have found that their time is monopolized these days by work and study.

Gupta, who has a bachelor of medicine and a bachelor of surgery and also a PhD from Cambridge, is at a point in his residency where he is taking care of critical patients and assisting surgeons.

He is also gaining more autonomy in the operating room as he works toward ever more complex surgical procedures.

While his earlier research focused, according to an OHSU bio, on “the novel discoveries he made around glial-neuronal interaction under molecular paradigms of traumatic brain injury, using a human stem cell platform,” Gupta’s main interest these days is in epilepsy, as it is an affliction where a strong case for surgical treatment, rather than pharmaceutical treatment, can be made.

He said he plans to use his sixth year of residency for epilepsy research, followed by his seventh and final year of surgery.

After that, Gupta, who also enjoys tennis, skiing and snowboarding, is hopeful that eventually his schedule may free up time for a little more dancing. “I’d love to because it really is a lot of fun,” he said. “Maybe when I have more control over my schedule.”

This article was originally published in The Scribe, a publication from the Medical Society of Metropolitan Portland.