The OHSU Stroke Center was an integral part of an NIH-funded global study that has shown that a diabetes drug may prevent a second stroke or heart attack in patients with insulin resistance.

The study was conducted at 167 institutions in seven countries, with the Oregon Stroke Center enrolling the second highest number of participants across the globe.

Wayne Clark, M.D. was a co-author of the paper.

The following press release was originally published by the NIH on February 17, 2016:

Pioglitazone, a drug used for type 2 diabetes, may prevent recurrent stroke and heart attacks in people with insulin resistance but without diabetes.

The results of the Insulin Resistance Intervention after Stroke (IRIS) trial, presented at the International Stroke Conference 2016 in Los Angeles and published in the New England Journal of Medicine, suggest a potential new method to prevent stroke 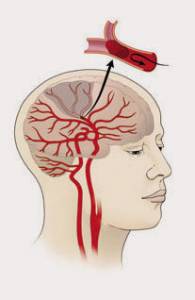 and heart attack in high-risk patients who have already had one stroke or transient ischemic attack.

The IRIS trial is the first study to provide evidence that a drug targeting cell metabolism may prevent secondary strokes and heart attacks even before diabetes develops.

Insulin regulates metabolism and keeps blood sugar levels from getting too high, along with many other processes, in the body. Insulin resistance is a condition in which the body produces insulin but does not use it effectively.