A new study sheds light on a powerful tool that may detect signs of Alzheimer’s disease before patients show any symptoms of cognitive decline: the home computer.

OHSU researchers have found a significant correlation between infrequent daily computer use and brain imaging signs commonly seen in early-stage Alzheimer’s patients. The researchers have been following a group of volunteers in Portland for nine years through a suite of embedded technology in their homes. 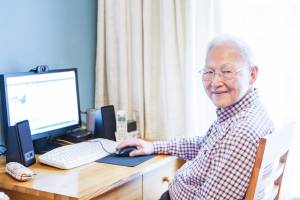 These tools allow the researchers to assess their mobility, sleep, socialization, computer use and medication intake.

The purpose of this monitoring is to identify meaningful changes in everyday life that don’t involve the participants taking tests or going to doctor appointments.

Using an MRI scan, the researchers measured the volume of the hippocampus — a brain region integral to memory function — in adults aged 65 years and older who were cognitively intact and dementia-free.

Diminished hippocampal volume is a well-known sign, or biomarker, of Alzheimer’s disease and the eventual development of dementia.

Silbert and colleagues hypothesize that the reason that patients with smaller hippocampal volumes may spend less time using their home computer is it requires the use of multiple cognitive domains, including executive function, attention and memory.

The researchers will continue to follow these participants to see if their smaller hippocampal volume and decreased computer use predict future cognitive decline.

Learn more:
Journal of Alzheimer’s Disease: Less daily computer use is related to smaller hippocampal volumes in cognitively intact elderly
The Oregonian: Could computer use keep Alzheimer’s at bay?
Portland Business Journal: Home computer use could help predict Alzheimer’s risk
Neuroscience News: Infrequent computer use may be an indicator of early cognitive decline