In 2013, Dennis and his family traveled from Missoula to Portland so he could undergo Deep Brain Stimulation surgery for his Parkinson’s disease.

In honor of Parkinson’s Awareness Month, Dennis has agreed to share his Parkinson’s story.

Originally published on Summit For Parkinson’s, a group of Montanans giving back to the Parkinson’s community. 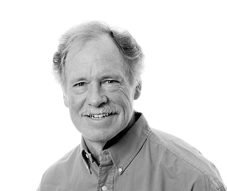 My intimate experience with Parkinson’s disease began 20 years ago when my father, at age 74, was diagnosed and began his journey dealing with the progress of the disease.

I watched him decline from a six-foot four healthy senior citizen and former police officer to a man who was unable to walk without aids, was unable to care for his spouse without endangering himself.

Dad finally passed away due to the consequences of two broken hips from Parkinson’s related instability leading to treacherous falling incidents.

The complications associated with pain management and other medical issues along with having Parkinson’s overwhelmed him. He passed away 10 years ago at age 84. I was diagnosed with Parkinson’s within a month of his death at age 54. I would have been very happy to wait another 20 years to age 74, but such choices are not available.

My Parkinson’s developed almost exactly in the same progression as my Dad’s giving some credence to the genetic causality argument. At this point my wife and my family including the ever developing little support unit now totaling four grandchildren have supported me and cared for me in ways that make one certain that a diet of love and a lot of laughter and commitment to each other is essential when facing any progressive disease or for that matter any health problem.

It may have been due to my observation of my father’s physical decline but I became committed to fighting Parkinson’s by following a program of vigorous exercise. Exercise is given considerable attention through the literature, websites and to some extent by the various neurologists I consulted at the beginning of this journey. However it is not given enough emphasis compared to the medicinal approaches. The key to exercise in a realistic world depends on one’s own individual commitment and to the support and accommodation by others.

In my case, I continued to play handball, golf, bicycle, ski, swim, and dry fly fish when my condition allows. All of the debilitating aspects of Parkinson’s such as loss of agility and hand eye coordination, balance and body management and control in three dimensional environments can be managed somewhat and even pushed back by engaging in this variety of athletic activities.

I owe the deepest gratitude to those men in the Missoula handball community for their unwavering encouragement and demanding standards “that the game must be played right” for 10 years of hard exercise in the company of good hearted men that kept me going when lesser incentives might let one quit trying to go it alone.

In addition, those I have played golf with, swum with, bicycled with, skied with and fished with kept me on track as well. In such an active environment I lost 50 pounds and maintained a number of skills after 10 years.

I cannot explain how or why the exercise works as I can’t explain how I can wobble my way to the tee box and hit a solid drive or seven iron between tremors, or cast to a rising cutthroat between shakes, but it works. I’m sure it works because I have continuously maintained my exercise program. Those skills make everyday life manageable within the parameters set by the progression of the disease.

The medicinal choices available to those people afflicted with Parkinson’s are limited with no major breakthrough cure emerging at this time. Further research is essential and needs the support of massive financial and intellectual resources. Until the time a cure is found those with Parkinson’s must live well today and must be ready for tomorrow and that requires more than medications alone.

When I was diagnosed with Parkinson’s I was a Professor of Economics and Asian Studies at the University of Montana. Teaching was my passion and my career was on full overdrive with fascinating work in emergent China with the US State Department and the Foreign Ministry of China just getting underway. I also served as an expert witness Economist in civil and criminal litigation for 30 years at the national level, including working for the US Department of Justice.

At the end of my first four years with Parkinson’s I had to stop teaching on a regularly scheduled basis primarily due to the inability to manage the side effects of medication. I couldn’t teach without unduly distracting my students. To a person, the undergraduate and graduate students at the University of Montana gave me the most inspiring level of support and genuine accommodation anyone could ever hope for. I have nothing but respect for them and hope for the future based on their good hearts and souls.

Because of the progress of the disease, it became extremely difficult to travel internationally. The research and program development work in Asian Studies and Economics came to an end in the seventh year.  I received tremendous support and encouragement from a broad range of faculty colleagues who were colleagues in the broadest and noblest sense of the term.

I was able to keep my expert witness work viable by narrowing its scope progressively until the end of the 10th year. Expert testimony requires an extraordinary amount energy that must be sustained to maintain analytic rigor in changing markets and to prepare for depositions and court room testimony. Eventually Parkinson’s makes testifying in front of judges and juries for long periods of time physically impossible.

I emphasize the continuation of work during the development of Parkinson’s to ensure those who eventually face the same problem that they can effectively continue working as long as they are very careful to be highly realistic regarding their changing capacity. In my case, the extraordinary professionalism of lawyers, judges and particularly the amazing capacity of jurors to look past disability and find the value of solid analysis can never be underestimated. It is a tribute to the way our system of justice really works.

The story of my Parkinson’s journey has many more chapters to be written. However, the story so far is mostly about the importance of your mate, your family, your friends and colleagues plus the goodwill of fine decent people that appear out of thin air, most of whom you know for only moments, who graciously support your will to fight on. Because of their support a person must find the will to fight on.