My team of researchers has discovered that as many as one in two individuals with hearing loss experience abnormal fusion, or a blending of dissimilar sounds, when wearing either bilateral hearing aids or a cochlear implant with a hearing aid.

This “averaging” of sounds worsens their ability to hear others’ speech.

Typically, two hearing devices, when possible, are better than one. But some individuals with bilateral hearing loss hear speech better when using a hearing aid or cochlear implant in only one ear. 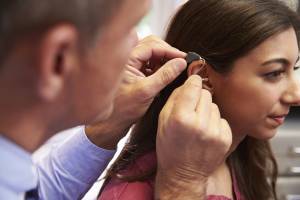 For more than a half-century, hearing scientists and audiologists have been puzzled as to why.

This study, published in the Journal of the Association for Research in Otolaryngology illuminates the cause of the abnormal processing that results in this phenomenon.

This understanding will enable scientists to develop ways to improve patients’ ability to hear.

Typical-hearing listeners only fuse similar sounds between the ears.  We found that many hearing-impaired listeners fuse sounds less discriminately, fusing those that are both similar and different between ears, such as a low-frequency sound, a man’s voice or low tone on the piano, for example, in one ear with a high frequency sound, like a woman’s voice or high tone, in the other ear.

The fusion also leads to averaging and distortion of the different sounds between the ears, similar to averaging of color between the eyes with the old-style red and blue 3-D glasses used at the movies.  For many hearing-impaired individuals, this fusion only distorts a few speech sounds.  However, for other individuals, fusion distorts the majority of speech sounds, and listening with two ears is so difficult that they choose not to use a second hearing device.

Our study also sheds light on why hearing-impaired listeners have difficulty understanding speech in background noise, and how abnormal fusion may contribute to this. If different voices are fused together, it is more difficult to attend to a particular person in a crowded room.

In the future, scientists hope to be able to offer patients with hearing loss brain retraining programs to help correct this abnormal brain processing. 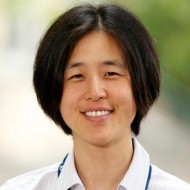 Lina Reiss, Ph.D. is an Associate Professor of Otolaryngology in the Oregon Hearing Research Center at the Oregon Health and Science University in Portland, Oregon. Her research focuses on speech perception, hearing aids, and cochlear implants. She has a severe-profound bilateral hearing loss and has worn hearing aids since early childhood.

10 responses to “Two ears are not always better than one”