Members of the Oregon Poison Center packed their bags and headed to Boston for this year’s annual toxicology conference. “Marijuana: The Poison Prevention Outlook” was one of the most anticipated sessions for the nation’s poison center educators.

In this session, Fiorella Carhuaz, the health educator for the Oregon Poison Center, explained the latest legalization laws and Oregon’s current marijuana use prevention campaigns. 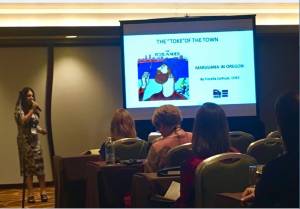 The Poison Center plays an important role in these efforts, along with their own educational programs, which include presentations to injury prevention groups and other interested groups, as well as making data reports easily accessible to the public.

Carhuaz also spoke about the Oregon Health Authority’s (OHA) “Educate Before You Recreate” campaign, an educational campaign to increase awareness of what legalization means in Oregon. The OHA is also working on a teen marijuana use prevention campaign that is currently in its piloting phase.

The Oregon Poison Center has been collaborating with public health entities and has been releasing data reports to help better understand how legalization is affecting the calls made to the OPC. Carhuaz has also been giving presentations on marijuana to injury prevention groups and parent groups in both English and Spanish.

To make a request for a presentation please contact her directly at carhuaz@ohsu.edu.

The Oregon Poison Center reiterates that people of all ages should call them regarding marijuana exposures. They do not judge and are there to help. The Poison Help Hotline is 1-800-222-1222.