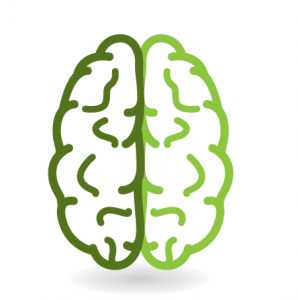 Here are five common myths about the brain – and the truth behind them.

1. You only use 10 percent of your brain

False! Techniques that allow scientists to see brain activity like positron emission tomography (PET) or functional magnetic resonance imaging (fMRI) show that we use every part of our brains throughout the day.

2. People can be right-brained or left-brained

While certain specific tasks, like understanding syllables in words, do involve one side of the brain more than the other, both hemispheres are active during complex tasks. People who are creative or logical don’t favor one hemisphere over the other.

3. After a certain age, you never produce any more cells in your brain

Until recently, it was believed that neurons, the cells the brain uses to send signals, stopped being made in adult brains. However, scientists have discovered that adult brains can create new cells, in certain brain regions, like those associated with making memories. In rats, exercise seems to help stimulate the production of new neurons.

4. The bigger the brain, the smarter you are

If this were true, elephants probably would have taken over the world by now. A better measure is comparing brain size to body size: human brains take up a lot more of our body than a whale’s.

5. Learning something new creates a new wrinkle in your brain.

The folds and wrinkles in your brain, called gyri and sulci, do help with intelligence, but they’re formed before you’re even born. If the brain’s surface was spread out, it would be the size of a pillowcase, so the folds are needed to help fit our brain into our skulls. When you learn something new, neurons make new connections and form new pathways, but those changes are so small you’d need a very powerful microscope to see them.

Rebecca Hood runs experiments as a fourth-year behavioral neuroscience Ph.D. student at OHSU, volunteers for NW Noggin and considers any weekend that includes a campfire a weekend well spent.

This article was originally published in Bridges, a magazine of people, connections and community for alumni of the OHSU School of Medicine.