At 42, Michelle Cristiani did not expect to survive a stroke. The mom of three was active, busy, and most importantly, young.

“Oh, you’re too young to have a stroke,” they said.

One evening in 2016, Michelle was at home taking care of her family, all four sick with the flu, when she herself began feeling dizzy with a headache. She chalked it up to the bug that was going around and ignored the symptoms. Partly in fear of being a bother and partly because she didn’t want to waste money to find out it was “just the flu.”

By 5 a.m. the next morning, Michelle was in an ambulance on her way to OHSU’s Emergency Room department. Doctors tested her right versus left side balance. To her amazement, she couldn’t feel anything in her right arm or leg. She had suffered a stroke.

“When they told me, I didn’t know what that meant at all…I wasn’t really prepared,” she said.

Over the next month, Michelle remained at OHSU in recovery. She had lost her peripheral vision, muscle mass and control, and mobility, among other things. She traded balance and concentration for bouts of vertigo – both the light-headed and the lost-in-space kind.

“One therapist described it to me as a screen door. All the stuff that comes into our world, most people have a screen door that can filter the information. For me, I have a hole in my screen door, so too much comes in all at once,” Michelle explained.

“If I notice the lights are bright, then I know I’m getting tired. I never realized before how much energy one’s body has to expend to sift all of that noise, but it definitely takes its toll now.”

“I really have to pay attention to my body, but it’s a good thing.”

This summer, Michelle is working on building her stamina and testing her endurance—getting back to doing things she wrote off as near impossible right after her diagnosis.

At a recent occupational therapy appointment, she worked on her sensory-motor skills with an exercise called the prism adaptation. Using special prismatic goggles that purposefully displace her visual field, she read letters and numbers out loud from a card, both up close and at a distance, to her therapist, Rosanne Yee, OTR/L.

Some letters come quicker than others, but Michelle was able to get through the first two rows before taking a break. Cognitive activities eat up glucose and burn a lot quicker than physical activity.

“It feels like my brain is grinding away,” Michelle laughed.

“Sometimes our brain is in a state of survival, and it can’t perceive what it needs,” Rosanne explained. “But the great thing about your brain is, if you give it the hydration and nutritious food, it perks up right away.”

Exercises such as prism are meant to get at the heart of what was damaged by Michelle’s stroke: balance, vision and coordination. As her body gets used to a new routine, she has to start challenging her brain just enough to keep driving at the neuroplasticity that’s still there. A chance at getting back to “normal.”

“It’s a stage of healing. You’re healed enough that most of the world perceives you normal, but they can’t see the struggle inside you,” added Rosanne.

Another way Michelle works on her recovery is through writing.

“After I had my stroke, I got a notebook and I went back to handwriting notes. I knew I wanted to write. I was writing all the time. It’s what I do.”

Growing up in New Jersey, Michelle always kept spiral notebooks nearby to document her thoughts. She now teaches reading and writing at Portland Community College, a few classes per term, to share her passion for the written word with college students.

Last fall, she submitted a prose piece about her stroke journey to CALYX journal. She entered the contest, hoping it would provide a snapshot of what her brain was throwing out – a constant flux between lucid, scattered, lucid, scattered. Her entry, “Blessed are the Breathing,” won the 2018 Margarita Donnelly Prize for Prose Writing.

Next up, an ethnography about her stroke recovery, mixing memoir and poetry with research in anthropology and interviews with stroke providers. Michelle hopes it will provide hope to other survivors of traumatic brain injuries, and inform their healthcare providers, lending a voice to what can often be a confusing experience.

That said, she wants to extend a special thank you to her care team, including Dr. Aclan Dogan, Dr. Hormozd Bozorgchami, Rosanne and physical therapist Cody Kaveh.

From Michelle, what’s the one tip for anyone experiencing symptoms of a stroke, or witnessing someone who is?

“Don’t be afraid to call. You never think it’s a big deal, but in hindsight, it’s always good to get a professional opinion.”

To learn more about the OHSU Stroke Center:

Michelle Cristiani teaches Reading and Writing at Portland Community College in Portland, OR. Recent publications include Awakenings Review 2017 and Oregon Poetry Association’s 2015 spring awards for experimental poetry and emerging poet. Michelle earned her doctorate in anthropology from the University of New Mexico in 2003. She is working on a memoir/ethnography of rehabilitation for traumatic brain injury. Find Michelle on Twitter at @mikkicristiani. 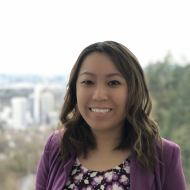 6 responses to “Memoir of a Stroke Survivor: Michelle’s Story”