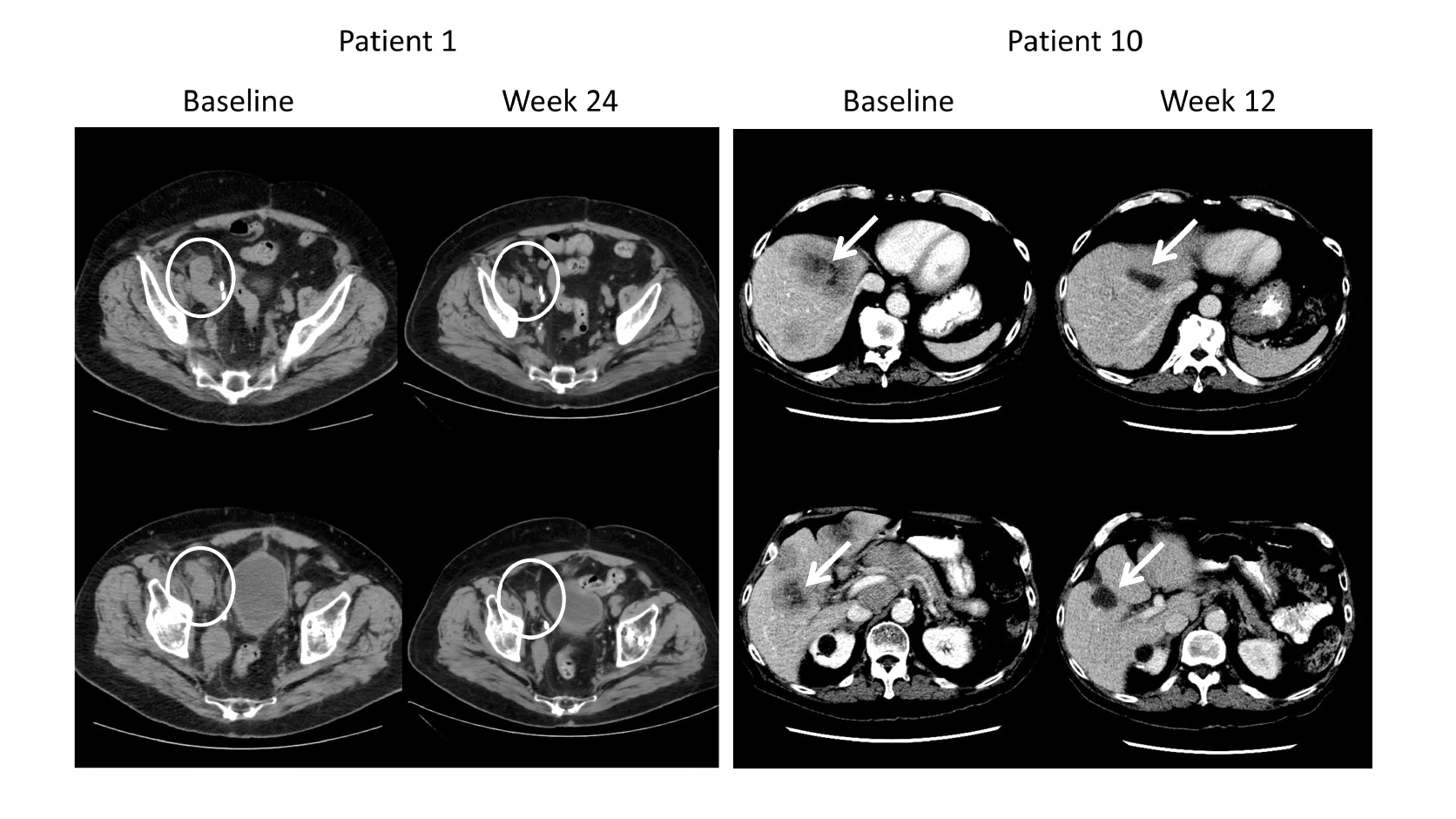 Restoring tumor-specific immunity is a treatment strategy that works well in melanoma and lung cancer patients. A new study is reviving hope that the approach also may help men with life-threatening prostate cancer.

It is a surprising turnaround because prior results in men with aggressive, advanced-stage prostate cancer showed no evidence of anti-tumor activity with immune therapies that work by blocking PD-1 signals.

In the study published today in the journal Oncotarget, 10 men with metastatic prostate cancer resistant to androgen deprivation therapy and the androgen receptor antagonist enzalutamide were treated with pembrolizumab, a monoclonal antibody that binds to the PD-1 receptor.

Three of the first 10 patients enrolled in the ongoing clinical trial experienced rapid reductions in prostate specific antigen, or PSA, an early measure of treatment effect. Subsequent imaging scans (shown in the figure above) showed that tumors shrank in two of these three men, including metastatic liver tumors in one patient. Two of the three patients who responded to the treatment gained relief from cancer pain and were able to stop taking opiate pain medication.

“It’s pretty remarkable, especially in light of the fact that many people doubted this approach could work at all.”

The research team led by Julie Graff, M.D., says the data provide, for the first time, evidence for meaningful clinical activity for PD-1 blockade in men with metastatic prostate cancer that is resistant to androgen deprivation.

“It’s pretty remarkable, especially in light of the fact that many people doubted this approach could work at all,” said Graff, lead study author and an oncologist specializing in prostate cancer at the OHSU Knight Cancer Institute. “You don’t get responses like this with almost any other treatment.”

Men in the study had been treated with the androgen-receptor inhibitor enzalutamide, but their cancers showed signs of progression in spite of this therapy.

The three patients who responded to PD-1 blockade started with serum PSA levels of 46, 71 and 2,503 ng/ml. These PSA levels plummeted to less than 0.1 ng/ml after treatment, and these three patients remain free of progression at 30, 55 and 16 weeks of follow-up, respectively.

Important questions remain unanswered. It’s not yet known whether PD-1 blockade can improve survival in men with metastatic, castration-resistant prostate cancer, and it’s not possible to select which patients are likely to respond to the treatment.

Three of the 10 men in the study had stable disease at 30, 47 and 50 weeks, while the remaining four patients did not show evidence of clinical benefit. One of those four men died of prostate cancer.

In spite of the uncertainties, Graff and colleagues say the results in the men whose cancer responded to the treatment clearly stand out. Approved agents for metastatic, castration-resistant prostate cancer rarely produce PSA reduction to less than 0.2 ng/ml when enzalutamide has stopped working. Significant responses in liver metastases are also relatively uncommon with androgen receptor-targeting drugs or cytotoxic chemotherapies, they said.

The researchers had previously reported on two patients who were exceptional responders to immunotherapy and hypothesized that the immune-modifying actions of androgen receptor blockers such as enzalutamide might enhance immunotherapy. That prompted them to develop the phase II study to evaluate the efficacy of the PD-1 inhibitor pembrolizumab.

“There are considerable data showing that androgen-ablation may augment an anti-tumor immune response,” the researchers wrote in the paper describing early results. “Enzalutamide therapy represents a more potent form of androgen suppression and may therefore be associated with previously underappreciated immune modulatory effects.”

As these results report on the experience of the first 10 patients, they must be viewed as preliminary. The ongoing study, which is continuing to follow these men and has enrolled additional patients, will provide more robust answers about the potential benefits of PD-1 for men with metastatic prostate cancer, Graff says.

Future studies are in the planning stages.

This research was funded by Merck Sharp & Dohme Corporation, and funds from the Bloomberg Kimmel Institute supported a portion of the laboratory work.