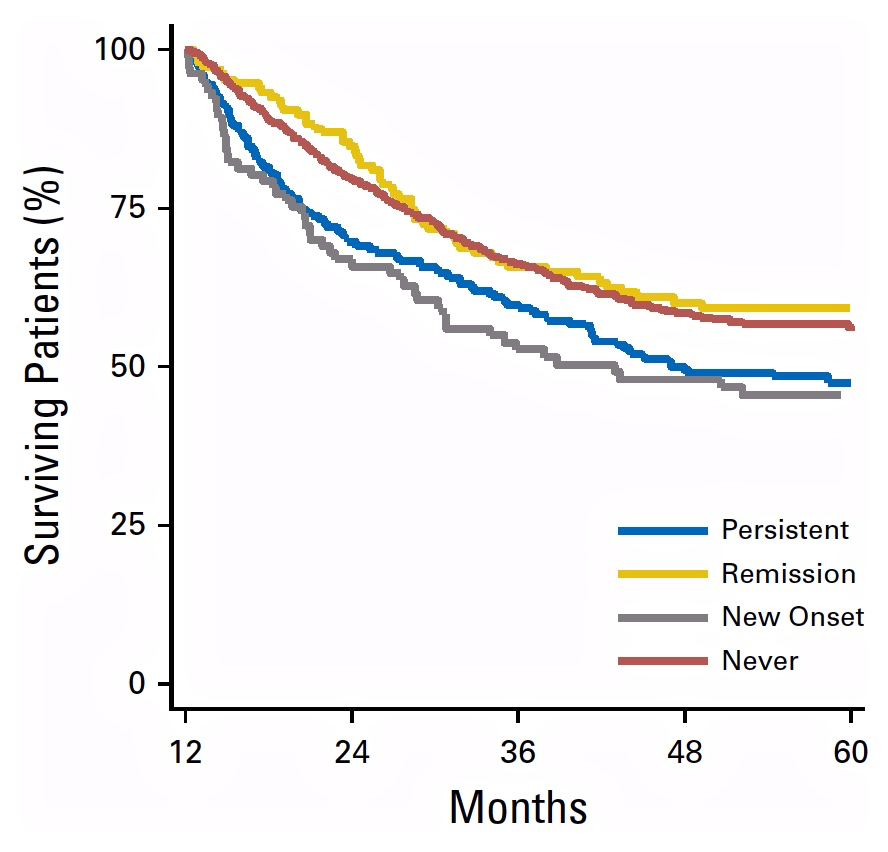 Nearly half of people with lung cancer experience symptoms of depression. And a significant fraction – up to 13 percent – develop a major depressive disorder. A new study suggests it might be possible to improve lung cancer survival by taking action to ameliorate depression.

The findings underscore the urgency of responding to the emotional toll of a lung cancer diagnosis.

But for those whose depression remitted by the time of the follow-up survey, outcomes were strikingly better. Their risk of death was the same as those never having had depression symptoms.

While further research is needed to determine whether depression treatment can actually improve survival, the findings underscore the urgency of responding to the emotional toll of a lung cancer diagnosis.

Rates of depression among people with lung cancer are consistently higher than among those with other cancer types. While oncologists are trained to attend to patient fears and anxieties, not all have the skills, tools, and clinical partners to fully respond to mental health needs.

“There is a lack of recognition that mental health is an important part of the cancer treatment continuum, and unfortunately lung cancer is often one of the forgotten cancers,” said first author Donald Sullivan, M.D., an assistant professor of pulmonary and critical care medicine in the OHSU School of Medicine and an affiliate with the Veterans Affairs Portland Health Care System and the OHSU Knight Cancer Institute.

“I sometimes liken a cancer diagnosis to the experience of PTSD for a traumatic event,” Sullivan said. “Even after a patient is in cancer remission, we need to remember that these feelings don’t go away – they are our patients for life.”

The study was published in the Journal of Clinical Oncology with co-authors including Linda Ganzini, M.D., M.P.H., and Christopher Slatore, M.D., both with positions at the OHSU School of Medicine and the VA Portland Health Care System.

Psychologist Paul Duberstein, Ph.D., a professor at the University of of Rochester School of Medicine in New York, said the study has many strengths, including its demographically and clinically representative cohort, and its efforts to account for confounding factors that are often overlooked, such as socioeconomic status, substance abuse and prior psychiatric history.

Duberstein reflected on what oncologists should do with the findings, given the unanswered questions about the role of screening for depression and when to refer cancer patients to a mental health specialist.

“Unfortunately many oncology providers are unlikely to have ready access to collaborative care teams because they work outside of major academic health centers or integrated health care systems,” Duberstein said in a podcast produced by the Journal of Clinical Oncology.

His advice: “Listen carefully when your patients talk about their emotions,” he said. “Most patients want to be heard, they want you to listen carefully and bear their pain compassionately, respectfully, even silently. Few are looking for an automatic referral to another specialist who will prescribe yet another medication.”