Seven of the 10 U.S. counties with the fastest growth in liver cancer deaths are in Oregon, according to an analysis by the Institute for Health Metrics and Evaluation at the University of Washington.

Barry Schlansky, M.D., M.P.H., an assistant professor in the OHSU School of Medicine, offered his perspective in The Bulletin:

[Schlansky] said over the past few decades 90 percent of liver cancer patients have had cirrhosis, mainly driven by hepatitis C infections. Hepatitis C infections are common in the baby boomer population, and the Centers for Disease Control and Prevention, recommend that those born between 1945 and 1965 be screened for the virus.

“Hep C takes decades to cause cirrhosis of the liver, so what we’re seeing is many people who are now in their 60s and their 70s have cirrhosis. Many don’t know they have it, because until cirrhosis becomes advanced, it does not cause any symptoms,” he said. “And that is the main risk factor for developing liver cancer.”

Reporter Markian Hawryluk noted that the prevalence of hepatitis C infection in Oregon was 50 percent higher than the national rate during the period from 2007 to 2011, and that nearly two-thirds were infected via intravenous drug use.

Schlansky told Hawryluk that liver cancer cases and deaths are projected to peak around 2020, as public health efforts and new and more effective treatment reduces the burden of hepatitis C. But Schlansky warned that progress could be partly offset by the rise in fatty liver disease linked to obesity, diabetes and high blood pressure.

Hepatitis B infection can also lead to liver cancer. It’s a particular challenge among Americans from countries in Asia and the Pacific Islands where chronic hepatitis B infection is more common. Liver cancer is the second-leading cause of cancer death among men in the Asian American, Native Hawaiian, and Pacific Islander population, and the ﬁfth-leading cause of cancer death among women in that population.

The UW researchers considered 28 cancers in addition to liver cancer. Overall, they found that cancer mortality decreased by about 20 percent between 1980 and 2014, but with pronounced differences from county to county, some having especially high mortality. The researchers pooled records from the National Center for Health Statistics, the Census Bureau, and the Human Mortality Database. The used small-area models to estimate county-level mortality. They published their findings in a paper in the Journal of the American Medical Association. 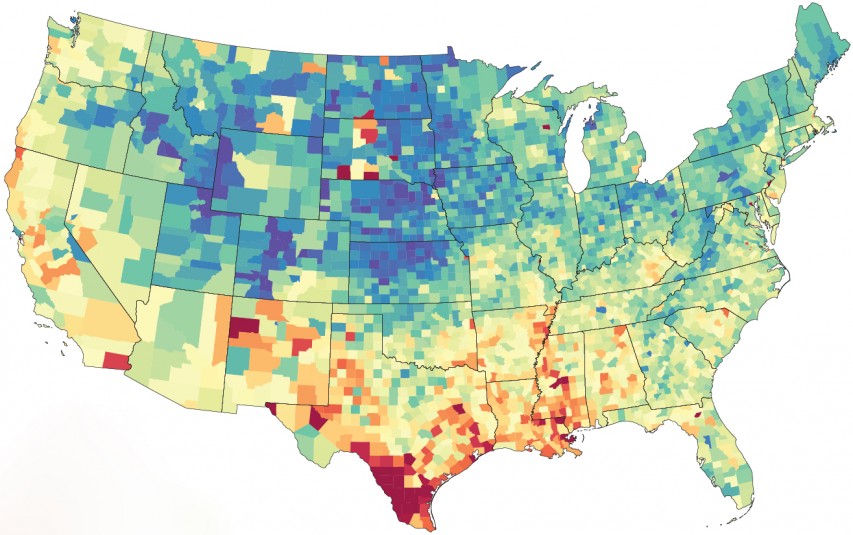 Trends and Patterns of Disparities in Cancer Mortality Among US Counties, 1980-2014 by Ali H. Mokdad, Laura Dwyer-Lindgren, Christina Fitzmaurice and others, JAMA (2017)