Cancer drug R&D spending may be a fraction of the estimate cited by the biopharmaceutical industry.

The average price of anticancer drugs has been rising by about 10 percent annually in recent years, with annual costs for a single drug now routinely running to $100,000 or more. The burden is falling hard on people with cancer. In one study, 34 percent of survivors went into debt (and 9 percent who went into debt filed for bankruptcy) even though 97 percent had health insurance. And when patients face unaffordable copayments, they’re more likely to delay or discontinue treatment.

One justification for the high price of cancer drugs is the required investment in research and development. But a new study co-authored by an OHSU physician estimates that R&D spending is a fraction of the cost cited by drug companies.

“What I would want patients to take away from it is to check your assumptions that these drug prices are warranted,” says Vinay Prasad, M.D., M.P.H., an assistant professor of medicine in the OHSU School of Medicine and member of the OHSU Knight Cancer Institute. “We have to speak up, and make our opinions known that we want drugs to be affordable, profits fair and R&D costs truthfully conveyed to us.”

“Policymakers can safely take steps to rein in drug prices without fear of jeopardizing innovation.”

Prasad and  Sham Mailankody, M.B.B.S., a hematologist and medical oncologist at Memorial Sloan Kettering Cancer Center, drew upon Securities and Exchange Commission financial reports from ten publicly traded firms with only one approved anticancer agent. Because all of the companies were simultaneously developing several compounds, the analysis took into account the cost of failure by tallying up the R&D costs for each company’s entire portfolio, not just the drug that won Food and Drug Administration clearance.

“We thought if we focused on the R&D spending of some pharmaceutical companies that have only one FDA-approved cancer drug in the market, we might be able to better estimate the cost of developing a cancer drug,” Mailankody said in a news release.

“We were surprised to see our analysis show this cost to be about $648 million.”

That’s about one-fourth the size of the widely cited $2.7 billion estimate given by the Tufts University Center for the Study of Drug Development as the average capital outlay needed to develop a single drug. The paper is published in the journal JAMA Internal Medicine. 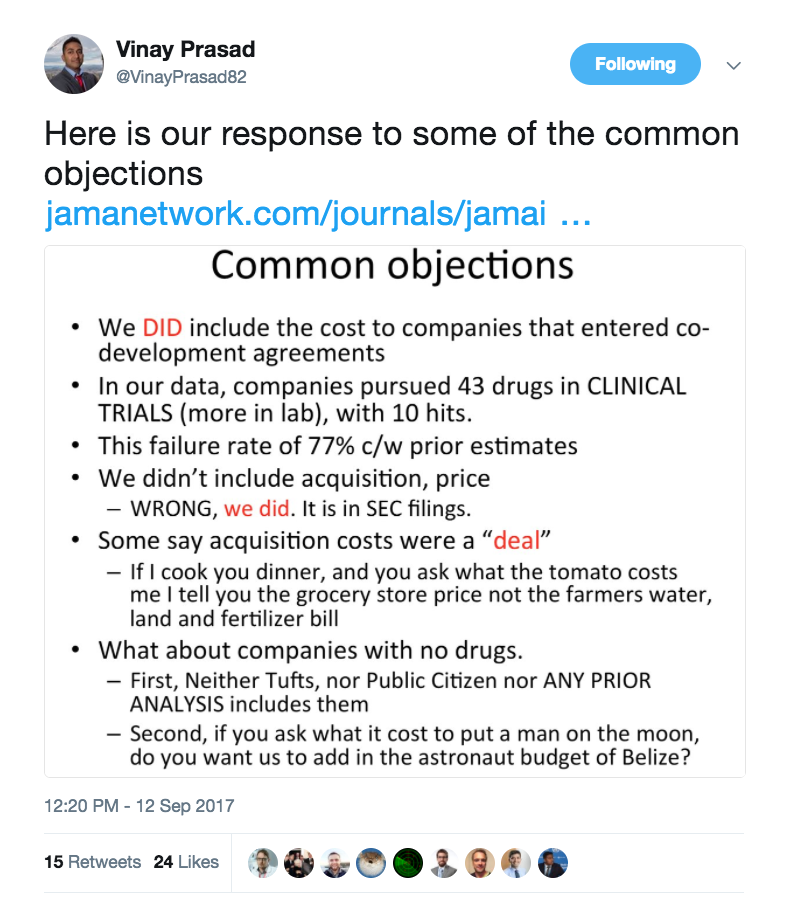 “The implications of the present study seem clear,” asserted an invited commentary in JAMA Internal Medicine. “Current pharmaceutical industry pricing policies are unrelated to the cost of research and development. Policymakers can safely take steps to rein in drug prices without fear of jeopardizing innovation.”

Research and Development Spending to Bring a Single Cancer Drug to Market and Revenues After Approval by Vinay Prasad and Sham Mailankody. JAMA Internal Medicine (September 11, 2017)