Researchers have uncovered a potential drug target for stopping castration-resistant prostate tumors – the second leading cause of cancer death in the U.S.

For decades, drug development for prostate cancer has focused on blocking androgens, or male hormones, from activating a protein called the androgen receptor. Hormonal therapies, however, never work in some patients, and eventually all tumors develop resistance that enables them to progress. These lethal prostate tumors resistant to hormonal therapies are the second leading cause of cancer death in the U.S.

Now, researchers at OHSU have uncovered a new target in lethal prostate cancer – lysine-specific demethylase 1, or LSD1 – that cancers use commonly as a workaround to resist hormonal therapies. The findings, published in the Proceedings of the National Academy of Sciences, set the stage for developing a new treatment approach to block lethal prostate cancer.

The results upend conventional thinking about LSD1. This protein was already known to play a role in the control of gene activity and cellular differentiation in healthy and cancerous cells. “But the widely held assumptions about how the protein functions were not holding true in our experiments,” said senior author Joshi Alumkal, M.D. “Our data led us down a different path.” Alumkal is an associate professor of medicine (hematology and medical oncology) and co-leader of the prostate program in the OHSU School of Medicine.

When functioning as an enzyme, LSD1 modifies proteins called histones that are like spools wrapped with strands of DNA that carry the genetic code. Histone modification is one way in which cells turn on or off specific genes. Previous research indicated that LSD1 played a role in prostate cancer as a regulator of androgen receptor function via histone modifications, though rigorous studies to confirm those effects were lacking.

The OHSU team, including first author Archana Sehrawat, Ph.D., showed that LSD1 could act as a driver of prostate cancer cell growth in a different and unforeseen way that does not involve histone modification or androgen receptor signaling.

First, Sehrawat and colleagues used drugs to block the enzymatic function of LSD1 and found that there was no effect on prostate cancer cell survival. This was in contradistinction to removing the LSD1 protein from cells using a technique called RNA interference.

Next, they used RNA interference to remove LSD1 from cells but then complemented cells with either a normal version of LSD1 or a mutant version unable to act as an enzyme to catalyze the histone modifications. Either version of LSD1 one was capable of sustaining prostate cancer cells, demonstrating that LSD1’s enzymatic function was not critical.

“From there, we sought to understand how the protein was functioning and how best to go after it with a targeted therapy,” Alumkal said. “We’re not just interested in finding treatments that may work; we’re interested in figuring out how those treatments work.”

The researchers went on to discover that LSD1 has another function that enables it to activate a network of dozens of “master regulator” genes involved in the control of cell division and other core processes that can sustain deadly prostate cancers that no longer depend on male hormones.

Because of redundancy among these master regulators, targeting any one of them is probably insufficient to stop prostate tumors from advancing. “But if you block a protein that is responsible for flipping the on switch on many of these master regulators, then you might be able to shut down cancer cell survival,” Alumkal said. “That is the value of targeting a protein like LSD1.”

Because his team confirmed that the enzymatic function of LSD1 was not critical, they reasoned that LSD1 might be functioning as a scaffold to recruit other proteins to control lethal prostate cancer master regulators. Their studies led them to a protein called ZNF217. The OHSU team showed that ZNF217 and LSD1 were bound to many of the same genes in lethal prostate cancer cells, suggesting that LSD1 and ZNF217 work together at these DNA regions. 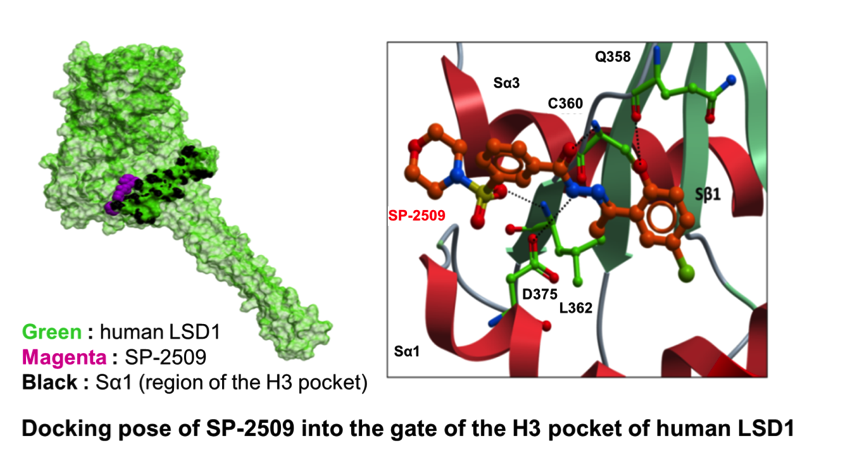 Pharmaceutical companies have identified compounds that inhibit LSD1. The OHSU researchers tested many of them, but found one called SP-2509 that looked particularly promising. Importantly, they found that SP-2509 kills prostate cancer cells grown in a laboratory dish. However, the OHSU researchers found that when prostate cancer cells were depleted of ZNF217 or LSD1, the drug lost its anti-tumor activity. This suggests that the drug works, at least in part, by interfering with the function of LSD1 and ZNF217.

The researchers capped off their efforts by testing SP-2509 in an animal model of prostate cancer – mice implanted with tumor cells that can grow without the androgen receptor. “Our preliminary experiments showed anti-tumor efficacy without toxicity to the animals,” Alumkal said. “That gives me hope that we will be able to move this strategy forward.”

Salarius Pharmaceuticals will soon begin a phase 1 clinical trial of an LSD1 inhibitor similar to SP-2509, called Seclidemstat, in Ewing’s sarcoma. The company has indicated that it also plans to develop a phase I clinical trial for prostate cancer patients in collaboration with Alumkal’s team.

“There is still more work to be done in the laboratory before Seclidemstat is ready for prostate cancer clinical trials,” Alumkal said. “However, we are optimistic that this drug or a drug like it that blocks non-enzymatic functions of LSD1 will fill a void that exists for prostate cancer patients.”

This research was supported by funding from the National Institutes of Health, Oregon Clinical and Translational Research Institute, Department of Defense, Medical Research Foundation, Kuni Foundation, Prostate Cancer Foundation, Anna Fuller Fund, Stand Up To Cancer, and the Movember Foundation.