His life was blasted apart by a rare but vicious type of cancer. Could an experimental treatment help?

When Derek Fadness woke up, the room was dark and his face was swaddled in bandages. He could barely move. As the ICU swam into focus, he nodded to let the nurses know he was OK.

He had just come through 10 hours of surgery. The doctors had removed a cancer-ridden chunk of his jaw and replaced it with a bone from his leg. A few weeks before, he had been an athletic 29-year-old who worked in construction and played guitar in a punk band. Now he was lying on a hospital bed like a human pincushion, tubes sprouting from his body.

A patient story by writer Chris LydgateThis year, doctors will diagnose roughly 1.8 million Americans with cancer. For many of them, the prognosis is hopeful: Thanks to dramatic progress in prevention and health care, survival rates are improving and treatments are getting less invasive.

Fadness’s story was not like that. It is the story of a man whose life was blasted apart by a rare but vicious type of cancer. It’s about surgery at the edge of medical science. It’s about an extraordinary team of health care providers. It’s about a patient who reached deep into the marrow of his bones to tap a hidden reservoir of strength and resilience. And It’s about an experimental treatment that represents the first real sign of hope in decades for patients like him.

A lump in the jaw

Fadness shared his story in a series of cellphone interviews in the hope that his experience could help people facing their own cancer journey.

One fall morning in 2019, he was getting ready to go to work in Salem installing insulation when he noticed something weird. His lip was numb. There was a tiny lump, like a BB, deep in his jaw.

A few days later, he went to see a dentist who figured it was an abscess. The dentist numbed him up and started to remove it. But as soon as he made the first cut, he stopped short. “Whoa,” he said.

Lying back in the dentist’s chair with his mouth open wide, Fadness knew this was not good.

By the time he met with doctors at the OHSU Knight Cancer Institute, the lump was the size of a marble. Their diagnosis was devastating: osteosarcoma.

Osteosarcoma is a rare type of cancer in which bone cells multiply out of control, forming a tumor that strangles healthy bone like ivy choking a tree. It is life-threatening and most cases are diagnosed in young people between the ages of 10 and 30. The tumors grow so fast they can cause agonizing pain as they distort bones, pinch nerves and stretch muscles. In advanced stages, the cancer spreads to the lungs and the brain.

Thanks to generations of doctors and patients, osteosarcoma can be treated, but the outlook remains daunting. The five-year relative survival rate is 60%.

Fadness was stunned. That night, he had a hard conversation with his girlfriend, Mallory Joseph. They had been dating for only a few months.

Her answer floored him.

“I love you,” she said. “Why would I leave you when you need me the most?”

A bone from the leg

First, there was no way to save his left jawbone. They’d have to take it out, from chin to earlobe.

They’d replace it with a bone from his leg. If you tap your shin, you’re feeling the tibia, the workhorse of the lower leg that bears your weight. Behind it stands the fibula. You may never have noticed it. Thin and light, it lends stability to the ankle, but most people can walk fine without it.

The doctors planned to sculpt his left fibula into a new jawbone. They’d use titanium plates and screws to fix it into place. Once he healed, they’d attach dental implants and replacement teeth. He’d get chemotherapy to kill any cancer cells that might remain.

It was a lot to take in. After they explained the plan, Fadness asked the question that haunts every cancer patient. What were his chances?

Fadness thought it over. “I was like, well in Vegas, that’s pretty good odds,” he says. He decided to go ahead. Now the lump was the size of a pingpong ball.

The surgery took place in November 2019. Surgeons made a long incision that snaked across his neck, and took out the diseased bone. They removed his fibula, reshaped it, and put it inside his mouth. They sewed the veins and arteries back together with sutures finer than human hair.

When Fadness awoke, his jaw was taped shut. His left lower teeth were gone. His leg was on fire. He was breathing through a tube. But he was alive.

Recovery was long and slow. His face was swollen. He couldn’t chew or swallow. He spent three days in the ICU and another seven on the hospital floor before he rolled out in a wheelchair.

Then came the chemo. The drugs for osteosarcoma are powerful but toxic. He lost his appetite. His hair fell out. He lay in bed day after day, robbed of energy.

He felt better after a couple months. He got a new job installing garage doors. It was tough work: climbing ladders, stacking doors, drilling holes and wiring control panels. But he felt his strength returning.

In January 2021, however, he felt something unsettling. The lump was back. Some stray cancer cells had survived the chemo and recolonized the replacement bone. He would have to have his jaw replaced — again. Surgeons took the other fibula.

Throughout the ordeal, Mallory took care of him. Sometimes she’d see him in the hospital, then work a graveyard shift at WinCo. During the depths of the COVID pandemic, the hospital clamped down on visitors. She’d hunt for a spot on the sidewalk that he could see through his window. Then she’d stand and wave.

“Just seeing her there, not on a screen, but in real life — that meant so much to me,” he says.

Davis, who directs the sarcoma program at the Knight Cancer Institute, kept a close eye on his test results. In September 2021, she saw bad news. A white shadow, shaped like a sea urchin, lurked in Fadness’ second new jaw. And there was something worse: a spot on his lung.

Hope on the horizon

Osteosarcoma is bad, but metastatic osteosarcoma (osteosarcoma that spreads) is heart-wrenching. Life spans are typically measured in months.

Davis is a leader in translational oncology, the practice of turning scientific discoveries into new therapies. She works closely with SARC, a national non-profit dedicated to curing sarcoma. She’s authored more than two dozen papers in medical journals and she’s spent the last 10 years looking for new ways to treat osteosarcoma.

A few years back, she and her partners at SARC explored immunotherapy: drugs that harness the immune system to destroy cancer. It was a good idea, but it didn’t work the way they hoped. The immune cells couldn’t get inside the tumors to zero in on the cancer cells.

Next the researchers tried targeted therapy: drugs that lock onto targets on cancer cells and shut them down. This kept the cancer under control for an average of four months. After that, the tumors developed resistance to the drugs.

“Four months may not sound like much,” Davis says. “But that was the most significant step we’d seen in osteosarcoma in an entire generation.”

In 2021, working together with Fariba Navid, M.D., at Children’s Hospital Los Angeles, Davis launched a clinical trial known as SARC038. It combines a targeted therapy drug named regorafenib with an immunotherapy drug named nivolumab. The idea is that the drugs turbocharge each other. In this kind of arithmetic, one plus one doesn’t add up to two. It adds up to three or four.

She asked Fadness if he was willing to try it. “Let’s give it a go,” he told her.

“That blew my mind”

Fadness was the second in the nation to join SARCO38, in September 2021. The regorafenib was a pill, the nivolumab an IV drip. Sometimes he got pain in his knuckles. The first time, it felt like a knife stabbing his hands.

He stuck with the treatment. Davis nudged the dose down. He used ointment and fleece gloves to ease the pain. He knew the odds were stacked against him, but he also knew something else: Statistics are averages. They don’t predict the outcome of any particular case.

SARC038 is a Phase 2 clinical trial designed to study a new therapy for refractory or recurrent osteosarcoma. It is one of several clinical trials sponsored by the Sarcoma Alliance for Research through Collaboration, a national non-profit dedicated to the development and support of research for the prevention, treatment, and cure of sarcoma. Find more information about SARC clinical trials.After six months, surgeons replaced his jaw a third time. This time, they took bone from a shoulder blade. They sent the old jaw to the lab for analysis.

The result was a shock. More than 95% of the tumor was dead — destroyed by the one-two punch of SARC038. And the nodule in his lung? Nearly gone.

It’s too early to tell how many people with osteosarcoma will benefit from SARC038. The trial is still recruiting patients around the nation, and results won’t be announced until 2026.

But Fadness has staged a remarkable recovery. Surgeons removed the nodule from his lung in October.

“Derek’s had an exceptional response,” Davis says. “Patients with this type of cancer usually get sicker within two months. He’s been stable for more than a year.”

“Derek is very brave,” Petrisor says. “He’s fought this with such courage. I’m really happy to see things going so much better for him.”

Fadness credits his recovery to his doctors, his family and his determination. “It wasn’t easy,” he says. “It was scary. But I wanted to beat this and be here for everyone that cares for me.”

“Cancer teaches you to slow down and smell the roses,” he says. “Not to rush through everything. You work with what you’ve got and you enjoy what you have through the time that it’s here. Because everything can change in a matter of seconds.” 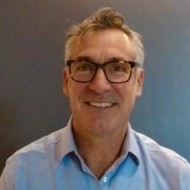 Chris Lydgate is a content strategist for the OHSU Knight Cancer Institute. In earlier incarnations, he was a magazine editor, healthcare reporter, author, and software coder. He has a longstanding interest in the history of medicine and likes making music with friends and family.

One response to “The cancer kept coming back”