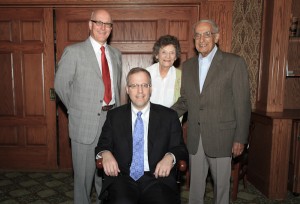 Mario and Edie Campagna are a precious commodity in our state. Committed Oregonians, they have worked hard their entire lives to build a wonderful state and then continued watching out for Oregon through wise and active philanthropy.

Mario Campagna was educated at what was then the University of Oregon Medical School here on Marquam Hill. Successful in school, he was called to the Mayo Clinic to train in neurological surgery, a new and cutting-edge specialty requiring the greatest dedication and skill.

Mario and Edie were so attached to their home state, though, that they returned to Oregon. After initiating his career here in Portland, Mario and Edie made a dramatic choice that would transform neurological care in Southern Oregon and help build the Medford community — Mario opened the first major neurosurgical practice between Portland and San Francisco.

For decades, Mario and Edie were respected leaders of the Medford community and medical world. Mario built a neurosurgical and neurological practice that was the mainstay of a huge region of Southern Oregon and Northern California. One of his four children also attended OHSU, trained in pediatrics at OHSU Doernbecher Children’s Hospital, and then went on to serve Oregon as a pediatrician. Mario and Edie became philanthropic leaders in Southern Oregon.

Imagine the pride I have had, then, since 2005, serving as the Mario and Edie Campagna Professor of Pediatric Neurosurgery, the only endowed position for a pediatric neurosurgeon in the state.

During this time, Mario and Edie’s personal mentorship, advice and guidance have been a wonderful part of my career and the growth of our program. Thus, June 29, 2012, is a special day that will always have special meaning for neurosurgery at OHSU Doernbecher.

I flew with Dr. Stacy Nicholson, Credit Unions for Kids Professor and Chair and Physician-in-Chief at OHSU Doernbecher, to Medford to celebrate the launch of the Campagna Chair of Pediatric Neurosurgery with Mario, Edie and other friends and family.

Mario and Edie’s generosity means that pediatric neurosurgery will now receive tremendous additional support and will be able to attract a national program leader, in perpetuity. The Campagna Chair is the first endowed chair in neurological surgery in the state (and the second endowed position overall).

The chair celebration was, most of all, a wonderful opportunity to visit with two individuals who are not just wise philanthropists that have devoted their careers and lives to Oregon and raised their families here, it was also a chance to spend time with now dear friends, who have a deep and tremendous sense of the value of Oregon and of Oregonians, and a clear vision of why we should all work to better their interests now and in the future.

One response to “Campagna Chair of Pediatric Neurosurgery at OHSU Doernbecher”