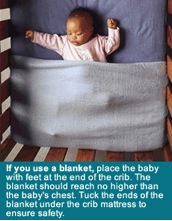 As a new parent, you may have difficulty fending off newborn sleep advice from grandparents and friends. On top of advice, there seems to be a dizzying array of infant sleep products on the market. At OHSU Doernbecher, we recommend families adhere to the American Academy of Pediatrics guidelines and place babies on their back for every sleep to reduce the risk of sudden infant death syndrome (SIDS).

We don’t know exactly what causes SIDS, but we do know the following practices help reduce the risk: 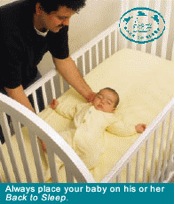 Babies who usually sleep on their backs but are placed on their stomachs for a nap are at very high risk for SIDS. So it’s important for everyone who cares for your baby to use the back sleep position for naps and at night.

Since the Back to Sleep campaign began in 1994, the SIDS rate in the United States has declined by more than 50 percent. Talk to all of the caregivers involved in your newborn’s care to ensure that each sleep is a safe one for your baby.