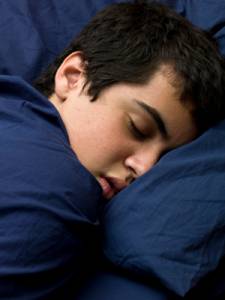 During the month of August, I frequently see teenagers in the OHSU Doernbecher Pediatric Sleep Disorders Clinic who are sleeping routinely until noon or later. Their parents are understandably concerned about school soon starting, wondering how their child will suddenly start waking up substantially earlier come early September.

Research has shown that teenagers are biologically prone to be “night owls,” and this tendency rears its head during the summer. The main reason this occurs is that teens often sleep as late as possible, usually much later than during the school year.

Getting them back on schedule involves resetting their light-dark cycle, which sets our daily internal body clock, or circadian timing system. For teen “night owls,” the most important exposure to light is immediately after waking in the morning. It is this light exposure that keeps our sleep-wake cycle from drifting later and later. When manipulated, this early morning light exposure can help advance (make earlier) teens’ sleep-wake schedule. This advancement is what is needed as school approaches.

In the time remaining before school starts, here is what we recommend:

Start where your teen is as far as his/her sleep-wake schedule and advance (make earlier) his/her sleep schedule while manipulating light exposure. Most teens need 8.5 to 9 hours of sleep per night to function well during he day.

For example, if your teen has been waking up at noon, a lights-out bedtime should be set for 3 a.m.  Given that only 1.5 weeks remain until the start of school, this sleep-wake schedule should be adjusted earlier by one hour every two to three days until the desired school schedule is reached.

After waking each morning, your teen should get outside to get natural light exposure as soon as possible. We recommend 20 to 30 minutes of light exposure at least (assign them to dog walking!).

The opposite is true at nighttime: there should be less light exposure in the one to two hours before bedtime.  We recommend no screen time, including no cell phone use, during the hour before lights out.

Taking a bath or shower the hour before lights out will help with sleep onset.  It is critically important to stick to the wake-up time even if your teen has trouble sleeping one night.  It is OK for your teen to take a nap during the day, as long as each nap is limited to 30 minutes.  Once the school sleep-wake schedule is reached, it is very important to not sway much from it on the weekends.

For more information about teens and sleep, visit the National Sleep Foundation.