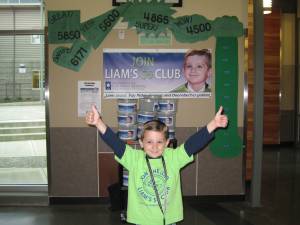 On June 24, 2010, after weeks of watching our son suffer from severe headaches, our local doctors found a “mass” on the right side of Liam’s brain. That mass turned out to be a cancerous brain tumor, 7 centimeters in diameter, called aniplastic ependymoma.

Within hours, the staff at Doernbecher was prepping Liam (and us) for surgery. Over the next five months, Liam endured three major surgeries and 33 rounds of radiation treatments at Doernbecher Children’s Hospital.

In early February 2011, our oncologist, Dr. Kellie Nazemi, shocked us when she announced, “All Clear!” when giving the results of Liam’s latest MRI scan. We knew we could never fully express our gratitude for our son’s life, but we found a way to start from an unexpected source.

When Liam learned that anybody could give money to help other children at Doernbecher, he emptied his piggy bank onto the table and said, “I’m 6 years old now and I want to give $6.” He presented his donation at the annual Heart of Doernbecher auction. From that small act, Liam’s $6 Club began and $6 donations started coming in from all over the country.

Liam’s classmates at Edy Ridge Elementary in Sherwood, Ore., sold homemade cookies, crafts and other services to raise almost $11,000 for Liam’s Club. The following year, other schools in Sherwood joined, and to date, Liam’s $6 Club has raised more than $60,000 for Doernbecher.

Because of Liam’s simple act, we learned that you don’t have to give your thanks all at once. Sometimes you can give it $6 at a time. We invite you to join Liam’s $6 Club and give thanks for each year of your life too.