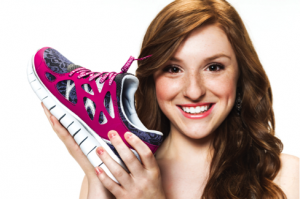 Standing rooted in place at her photo shoot, Kylie was unsure of what to do.  And then she began to dance.  Suddenly, the quiet girl transformed into a whirling dervish of joy – hair flying, eyes shining, face radiant.

A brain tumor kept this young dancer off the floor for awhile, but not for long. Her passion for performance found her back in action a mere two weeks after surgery. “She was incredibly determined,” said her mom.  “I was walking down the hall with her right after surgery and asked if I was going too fast. She said, ‘No, you’re going to slow. I want to run!’”

Kylie applied that same determined attitude to her shoe design, which went through several iterations before she felt it was exactly right. “The first two versions were not cute,” she admitted. “So I went back to the drawing board.”

The third time was the charm with her Nike/Doernbecher Freestyle Free Run +2, which sports lace panels that are exactly like the lace on one of Kylie’s favorite shirts.  A bird on the tongue represents freedom, and the inside of the shoe features the words “freedom” and “strength” along with her signature. 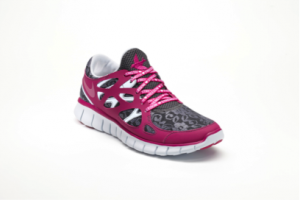 Kylie wants to pursue nursing when she gets older and says working with the other young designers has given her valuable perspective.  “I don’t know them very well, but I know they’ve been through a lot.”

“Kids face some pretty hard stuff, so it’s nice to be able to give back to the people who gave me so much.”