Q: So a cowboy rides into town on Friday and leaves on Friday but only stays three days. How is this possible?
A: The horse’s name is Friday.

That’s the kind of non-stop entertainment you can find from Finnigan Joseph Mooney, a natural comedian with an infectious smile. Finn has toughed out more than 13 heart surgeries during his life, but his positive attitude has remained unscathed.

Making his friends and family laugh is just one of Finn’s favorite hobbies. He also loves playing basketball, jumping on his trampoline, and perfecting his killer golf game (he recently placed second in a local junior golf tournament).

Finn poured every bit of his sunny personality into his Nike/Doernbecher Freestyle custom kicks. An in-your-face yellow upper is emblazoned with the words “THUMP THUMP” in homage to his unstoppable heart. The Nike swoosh is affixed with medical stitches just like the ones used during Finn’s surgeries, and his actual thumbprint appears on the outsole of the shoe. 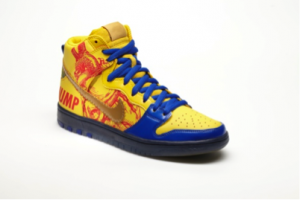 “Whenever Finn came out of surgery, we’d look for him to give us two thumbs up,” said Finn’s mom, Aimee. “It became a pretty important symbol for us.”

Finn also included some words of encouragement in his design that might sound familiar. Inside, one shoe reads “I CAN,” while the other says “DO IT.”