Nine years ago, when I started medical school, I told my husband (who was then my boyfriend) that I wanted to train for a marathon. Many of my colleagues in Northwestern’s M.D.-Ph.D. program ran marathons. The kind of people who embark on a really long, intense dual degree program like that tend to push themselves in other areas of life, and do intense, crazy things just to prove they can. My husband thought that was a terrible idea. “You’d be running for hours every day,” he said. “I don’t see you enough as it is.”

I don’t see you enough as it is. At the time, I was in the first year of medical school, taking classes from eight to noon with occasional afternoon seminars. He was working part time. We didn’t have kids. And still, it seemed completely true. So I didn’t run a marathon.

2 mice, 1 salamander
My daughter was born toward the end of my Ph.D. years, when I was finishing a few final experiments and writing my dissertation. I started working in the lab again part time – a few half-days a week – when she was 5 weeks old. It was great. I left the house, interacted with adults and felt productive, and then I came home and spent the rest of the day with my tiny baby. I remember walking home from the subway stop on a beautiful fall afternoon, thinking that my life was just perfect.

Then I finished the Ph.D. and went back to the third year of medical school, and everything changed. My first rotation was at the VA hospital, and my 5-month-old daughter went through a growth spurt and woke up every hour or two at night. I slept three hours a night and pumped milk while standing at the sink in the bathroom because there wasn’t a lactation room in the entire VA. I never had enough milk and we started supplementing with formula. I was exhausted and miserable and most of all, I missed my time with my beautiful, cheerful, playful little girl.

My Ph.D. adviser, who has a college-age daughter of her own, told me: “You think she needs you so much right now, but she’s OK. She needs somebody to care for her, but she doesn’t need you. You’ll see. She’ll need you so much more when she’s older. Right now, you’re the one who needs her.”

In retrospect, I can see that this is true, but it doesn’t exactly make it easier.

2 mice, 2 salamanders
People often asked me how I managed to find the time to study during the last two years of medical school. The short answer is that I didn’t. The longer answer is that I studied in stolen moments: on the train, between surgeries, while pumping milk. I never studied at home. My exam scores may have suffered, but I could sacrifice that. I could do well – not great but well – on the test and still be a doctor. I could even be a good doctor. There’s a joke: What do you call the guy who finished last in his medical school class? Doctor.

It was the same with my dissertation: I wrote furiously whenever my daughter slept and stopped as soon as she woke up. Amazingly, it got done. I suspect I could have used my time more efficiently all along, but sometimes you don’t know what you can do until you’re forced to do it.

When you’re a woman with a career, there’s never a good time to have a baby. Really, there isn’t – and believe me, I’ve thought about this. So two months into residency (12 weeks ago now) I had another baby. It seemed as good a time as any.

This time, we live closer to my husband’s supportive family. This time, I’m a resident, not a medical student, so I have no qualms about announcing that it’s time to pump milk, and I produce plenty. And this time – through no planning of my own – I had a perfect little boy who is calm and sweet and sleeps through the night.

How hard could it be?

2 mice, 2 salamanders, 2 frogs
During the last week of maternity leave, my daughter and I checked out a book from the library called Balancing Act, by Ellen Stoll Walsh. Two mice find a stick and decide to make a teeter-totter on a rock. They balance (ta-dah!) until a salamander comes along and joins them, disrupting their equilibrium. Another salamander balances it out again. Then a frog joins them – uh-oh, one side is too heavy – and it takes another frog to even things out again. Finally, a bird joins them, and sits down so hard on one side that the animals on the other end of the stick are flung into the air. But if all the animals cluster on one side of the teeter-totter, they can even balance with the bird – until the stick breaks under their weight. Most of the animals give up at that point. The original two mice take half the stick and make a new teeter-totter, just for the two of them. Balance once again. Ta-dah!

Like many good children’s books, after the 50th time you’ve read it to a demanding toddler, you start to see a metaphor for life. You get yourself nice and situated – and then life throws you a salamander, or, God forbid, a bird. But eventually things even out again. I remember feeling like I had no time to get things done when it was just my husband and me. Then we had a baby, and we couldn’t figure out what we used to do with all our time before we had her. Now we have two kids and we wonder why we didn’t notice how easy life was with just one. Somehow we have time for everything and nothing, just like always. 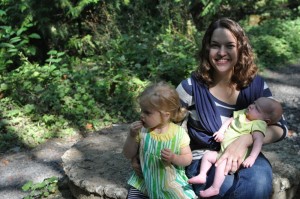 It’s been hard for me to admit how difficult it is to be a resident with two kids. When people ask, I usually tell them it isn’t that bad. My son sleeps eight to 10 hours a night, every night, without fail (don’t hate me – I had the other kind of kid, too). My husband stays home with the kids and his parents drop in for emergency baby-sitting. I really love what I do. I work with smart, friendly, generous, amazing fellow residents. The OHSU residency program has been unbelievably accommodating and helpful. Everyone around me has done everything possible to make this as easy as it can be. I am basically the luckiest working mom you’ve ever met.

All of that is true, but it’s still hard. I finally had to admit it to myself a week ago when my little boy didn’t want to nurse. He wasn’t hungry, and he pushed me away, and it occurred to me that he might prefer a bottle. Why wouldn’t he? He drinks from bottles all day long, every single day. I hate that. What I really want is to be two people at once: one who works all day in the hospital and another who stays at home all day with two kids. I don’t want to be just one thing. I want balance.

2 mice
Balance is hard to come by. When I was asked to write a post for this blog, I procrastinated, waiting for an idea to come to me. This was a terrible idea. I started a long stretch of 12-hour days, and writing was the last thing on my mind. I decided I’d write during my daughter’s nap on my day off, but I got a stomach bug instead, and spent my daughter’s nap whimpering under the covers. Then I thought I’d write in the early morning while everyone else was asleep, but my daughter decided to get up early and eat breakfast with me. I can never count on free time. You’d think I would know that by now.

So this was written one-handed, while feeding my baby or pumping milk for him. And it’s written with a creative structure taken from a children’s book so my addled brain doesn’t have to generate a coherent narrative. Still, I got it done. That’s kind of like balance.

How many people work all day at a job they love, where they feel respected and get to help other people, and then come home to two beautiful, healthy children and a loving, supportive spouse? In the evening when I come home from a busy 12-hour day at work, and I read to my daughter while my husband makes dinner and my son smiles big, toothless smiles, I think that my crazy life is just perfect.