My story with Doernbecher began over 20 years ago when my daughter, Beckie Child, was 16 years old. At the time she was a popular, athletic and vibrant teenager at Parkrose High School.

One day at basketball practice, Beckie had a great deal of pain in her leg. My wife, Geri, and I took her to the doctor and were told we needed to get to Doernbecher Children’s Hospital as soon as possible.

Beckie’s doctor at Doernbecher, Dr. Boss, diagnosed her as having osteogenic sarcoma in her left femur bone — Beckie was not expected to survive. In early December 1989, Beckie underwent two surgeries — one to remove the infected bone and replace it with a prosthesis and the other to insert a port-a-cath into her chest so she could begin her chemotherapy treatment.

During one of these operations, Geri and I went back to Beckie’s hospital room to wait for her surgery to be completed as there was not enough room in the operation room waiting area. Beckie shared a room with three other patients and their families. The room was loud, cramped and we did not have the privacy we needed, so we moved our chairs out into the hallway for some peace and quiet.

At this time we witnessed another family going through a very difficult time, again without the privacy they needed. This family eventually lost their daughter to cystic fibrosis. It was clear to me something needed to be done about the old hospital facility so families could have the privacy and peace they needed during such difficult times. We needed a new hospital!

The experience we had at the old Doernbecher hospital inspired me to turn to the kids of Oregon and southwest Washington to begin fundraising for a new hospital. We started the Kids Making Miracles (KMM) program in 1992 and it played an imperative role in the construction of the new OHSU Doernbecher Children’s Hospital we know and love today.

Even more importantly, students involved in KMM learn valuable lessons about the importance of philanthropy, helping their community and being leaders in their schools. 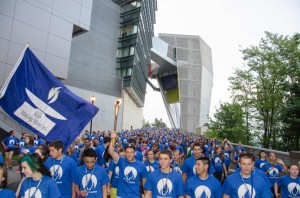 This past year, Beckie had her leg operated on again to remove the old prosthesis to replace it with new a new one. During this time, Beckie’s doctors found another cancerous tumor. It took two surgeries to remove the tumor, and she spent a lot of time in the hospital.

I could hardly get over the reason she was a nurse today is because of what happened to Beckie when she was 16 years old and now this woman is taking care of Beckie as an adult. I am a true believer that things happen for a reason!

On Friday, May 10, the KMM Executive Student Council hosted the annual KMM Candlelight Ceremony at Doernbecher. This is a very special event where students from all over Oregon and southwest Washington come together to celebrate their efforts in fundraising for Doernbecher. 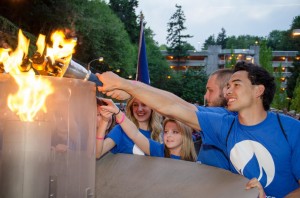 The ceremony took place at the OHSU Auditorium, followed by a procession down the hill and ending at the Miracle Garden in front of OHSU Doernbecher Children’s Hospital where students ceremonially rekindled the Eternal Flame — a symbol of hope for kids and families at Doernbecher.