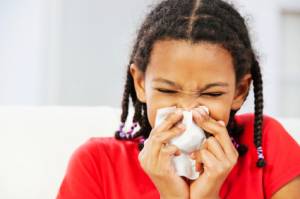 I often have families come to me looking for a magic formula that will cure their child’s cold and get rid of all the symptoms. Simply put: There is no magic formula for treating a cold, and there are no over-the-counter (OTC) products that are safe and effective for treating young kids.

You should never use OTCs in kids younger than 6, and I never recommend them in general.

As you probably know, colds are caused by viruses, tiny organisms that are transmitted easily when we cough, sneeze or otherwise come in contact with them. There are no antibiotics that treat these viruses — none, nada, zippo, zilch.

If there is going to be fever, it will be in the first one to three days of illness. Often, these fevers are 101 or lower, but we see higher fevers pretty frequently. A fever is not scary to pediatricians — it is the body’s natural response to the virus and actually can help the immune system function more efficiently.

The nose stuff generally follows pretty quickly. While at first runny and clear, the mucus quickly gets gunky, yellow and green. This is a sign that the body is fighting off the infection, and the color is not important. Symptoms can last up to two weeks.

The next thing we see is cough, which generally appears in the first few days. It starts off dry, and then gets harsher, deeper and junkier. The cough can take three weeks to go away – I know that is a really long time.

Let’s look at the OTC medications and how they might help (although, as I stated, they, for the most part, do not help.)

Fever: There are two types of medicine that can help decrease a fever in a child: acetaminophen (e.g., Tylenol) and ibuprofen (e.g., Advil). These actually work, and are useful if the fever is making the child feel cruddy. If the child is happy and playful, even with a fever, there is no need to treat! Ibuprofen may work a bit longer than acetaminophen (six to eight hours compared with four to six hours), but both will bring a fever down.

Runny nose: The most common medications used for a runny nose are antihistamines. You may see diphenhydramine, chlorpheniramine, brompheniramine (Benadryl, Dimetapp and many others) on the label. These have never been shown to make any difference in kids and have been associated with lots of bad side effects. They tend to dry up secretions, so in theory, less mucus. However, they also act on the central nervous system, causing sedation and a bunch of other potentially bad things. Not good for kids in general.

You can also find vasoactive agents, like pseudoephedrine. These meds act on blood vessels causing constriction, which in theory would decrease the swelling in the nasal tissues. Like antihistamines, they have been shown to be ineffective in kids, and have a ton of side effects as well, including sleep problems, heart beat irregularities and other unpleasant things. Stay away!

Cough: There are two types of agents for cough. The first are expectorants, like guaifenesin (used in Mucinex and others). These medicines are supposed to thin secretions and make it easier to cough up the mucus that forms in a child’s lungs in response to the virus. A number of studies have shown that this stuff doesn’t do anything for kids at all. Despite the cute ads, it is no better than a placebo (sugar-syrup).

The second cough medicine is dextromethorphan (the DM in all the cough syrups.) This is a cousin of codeine, which has been shown to help decrease cough in adults, but, interestingly, does not work in kids. DM has been been studied extensively, and is no better than sugar-syrup for cough in kids. It, too, has been associated with a host of bad side effects, including seizures, so it is something I would stay away from.

Among the most dangerous aspects of OTC cough/cold meds for kids is illustrated in a recent photo taken at a local pharmacy. There are multiple formulations of every OTC brand, and each can have one or more of these kinds of  meds. This leads to lots of confusion for parents. One person’s Dimetapp may be very different from another’s. This has led to overdosing and other bad things for kids.

The only thing that has ever really been shown to be better than a placebo (sugar syrup) for treating kids with colds is good old-fashioned honey. While honey should never be given to kids younger than 1, it has been shown to decrease cough in kids older than 1 with colds.

OK. So what are the take-home messages?

As pediatricians, we can do a lot to help ensure your child thrives. Sometimes the best thing we can do, however, is to help you protect them from unnecessary medications, and that can be magic.

Parents: You can check symptoms and medication dosing via the OHSU Doernbecher app, MD4Kids, available for downloading here.