What’s the best way to keep my children’s skin safe while enjoying time outdoors this summer?

We recommend seeking shade, when practical, during outdoor activities. It’s best to plan trips to the beach or park in the early morning or late afternoon when possible. This avoids exposure to sun during peak UV (ultraviolet) radiation hours, between 10 a.m. and 4 p.m.

When out in the sun, physical covers such as hats, rash guards, umbrellas, sunglasses and long sleeves/pants are paramount. Most fabrics with tight weaves provide fairly good SPF (sun protection factor). There are also over-the-counter products that can be added to the wash and impart higher SPF coverage to clothing.

For skin that is left uncovered, look for a sunscreen that is labeled “broad-spectrum” to cover against both UVA (ultraviolet A) and UVB (ultraviolet B), and that has an SPF of at least 30. Higher SPFs correlate with a longer amount of time a person can stay out in the sun without getting sunburned.

For practical use, choose at least SPF 30 and plan to reapply every two hours, and always reapply immediately after swimming or sweating because no currently available sunscreen is completely “water-proof.” It is important to apply sunscreen liberally, because applying it too thinly will reduce its SPF effect.

What potentially harmful effects does the sun have on our skin?
Sunlight that reaches the Earth’s surface contains UVA and UVB radiation. Ultraviolet radiation damages the skin’s DNA, which is the first step to skin cancer development. Ultraviolet radiation also causes photoaging of the skin, such as brown spots, laxity and wrinkling.

Both UVA and UVB have been implicated in skin cancer development. UVA is the longest wavelength of UV radiation and penetrates the most deeply into human skin. UVA passes through window glass in homes and cars and is the form of radiation most often employed by tanning beds, which have now been definitively linked to increasing rates of skin cancer, including melanoma. UVB radiation is responsible, in large part, for sunburns.

UVB exposure over an individual’s lifetime is tightly linked to the risk of developing squamous cell and basal cell carcinomas, the most common forms of skin cancer. The amount of UVB radiation that reaches the Earth’s surface is proportional to the height of the sun in the sky. That’s why in the Oregon summer months, the risk of sunburn is greater.

I don’t have to worry about my kids getting skin cancer – that’s something that happens to older people.  Right? 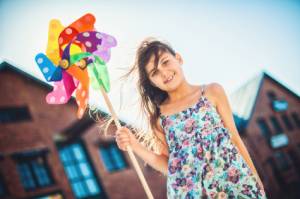 Is skin cancer among children and adolescents really a problem in Oregon?
Compared with other states, Oregon actually has a relatively high rate of melanoma. This may be related in part to the high proportion of Oregonians with fair skin, which is a known risk factor for melanoma. In addition, many Oregonians sustain episodic, intense UV exposure over Spring Break, via tanning bed use and during our fleeting, but intense, summer months (versus modest daily sun exposure in places where it is more sunny year-round).

Do the sun’s rays have any health benefits?
UVB light helps the body create vitamin D. However, there is a threshold above which more UVB does not equate to more vitamin D formation. This amount of time is hugely variable depending on your skin’s natural pigmentation level (it takes less UV to make vitamin D if you have fair skin, and it is also takes less UV to sunburn), your age (older skin does not make vitamin D as efficiently), the latitude and time of year.

Any blanket recommendation about how much time people should spend in the sun is bound to be inaccurate for these reasons.

Won’t using sunscreen regularly lead to vitamin D deficiency?
Use of sunscreen has not been shown to significantly impact vitamin D levels. Studies in humans have shown that regular use of sunscreen does not put people at risk for vitamin D deficiency. Because there is no known “safe” amount of UVB to receive for any given individual and there are great sources of vitamin D that can be taken orally without increasing risk for skin cancer, we recommend photo-protection from ultraviolet radiation and obtaining vitamin D through foods, with vitamin supplementation if needed.

There are so many different types of sunscreen out there.  Which one should I buy? 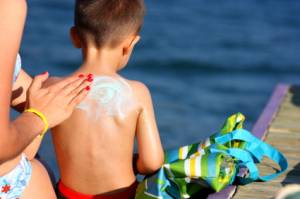 There are two main categories of sunscreen, those that act as physical blockers (zinc oxide and titanium dioxide) and those made of chemicals that absorb UV. The advantages of sunscreens containing only physical blockers are that these agents tend to be less irritating for people with sensitive skin, and that they are active immediately after they are applied to the skin.

Occasionally, people can become allergic to chemical sunscreens and their vehicles (bases) can be irritating for those with sensitive skin. Some have raised safety concerns regarding chemical sunscreens – particularly with oxybenzone and retinyl palmitate. Research to date suggests that these agents are safe for use as sunscreens (“Safety of oxybenzone: putting numbers into perspective.” Arch Dermatol 2011; Saftey of retinyl palmitate in sunscreens: a critical analysis. J Am Acad Dermatol 2012).

Do I need to avoid buying micronized physical sunscreens?
Some have raised concerns about the possibility that micronized physical blocker sunscreen agents may be absorbed into the bloodstream as “nanoparticles.” This concern has not been validated. Current evidence suggests that micronized zinc and titanium particles aggregate in the top layer of the skin (the epidermis) and are not absorbed into the systemic circulation (“Measurement of skinpermeation/penetration of nanoparticles for their safety evaluation. Biol Pharm Bull 2012; Stratum corneum is an effective barrier to TiO2 and ZnO nanoparticle percutaneous absorption. Skin Pharmacol Physiol. 2009; Huan safety review of “nano” titanium dioxide and zinc oxide. Photochem Photobiol Sci 2010).

What’s the bottom line?
Keep active and enjoy Oregon’s great outdoors this summer, but be sure to be sun smart with the above tips and techniques to keep your kids and yourself healthy!