This year marks the 10th anniversary of Nike/Doernbecher Freestyle, a powerful partnership between Nike and OHSU Doernbecher Children’s Hospital. To celebrate this important milestone, Nike is rereleasing five Freestyle fan favorites in the weeks leading up to this year’s unveiling.

At age 16, Mike participated in the 2007 Doernbecher Freestyle program while recovering from heart valve replacement surgery. With a brother in Iraq and a huge patriotic streak, he had no trouble picking the theme for his signature Air Max 95. To this day, his stars-and-stripes custom shoe remains a bestseller.

Mike, now 22, is still going strong. He holds a degree in automotive technology and spends his free time enjoying the great outdoors and building very fast cars, either for racing or cruising Vancouver, Wash. Mike says his favorite memory from the Freestyle program was participating in the design process and getting a behind-the-scenes look at how the unique shoes are made.

Mike’s kicks include personal elements to illustrate his story including: 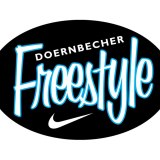 Fifty-two shoes have been designed since Nike/Doernbecher Freestyle first launched in 2004, and they are as unique as the kids who designed them. OHSU Doernbecher and Nike have raised more than $5 million through the sale of limited-edition Nike shoes designed by OHSU Doernbecher patients.