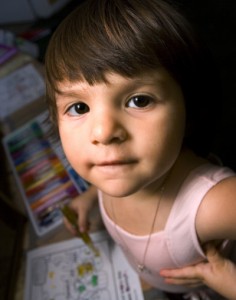 Autism Spectrum Disorders, or ASDs, are a type of developmental disability that begins in early childhood. ASDs are relatively common, affecting as many as one in 50 children.

As pediatricians, we know that identifying children with ASDs early in life is important. The treatment for autism is behavioral therapy, and the sooner that children with ASD starts therapy, the better their functioning will be later in life.

Early diagnosis is important, but the early signs of autism are difficult to detect, both for parents and for pediatricians. Your doctor might be concerned for ASD if your child:

Because these signs can be subtle, the American Academy of Pediatrics (AAP) recommends that pediatricians screen for ASD at 18- and 24-month well-child checks using a standardized checklist. In addition, the AAP recommends that pediatricians screen for general developmental delays at the 9-, 18- and 24-month well-child checks. These tests help pediatricians better identify which children are in need of further ASD evaluation.

My research team is interested in finding out how many pediatricians are performing these important tests. We especially wanted to find out if they were offering tests to families who are at high-risk for delayed ASD diagnosis. Several studies show that Latino families are diagnosed with ASD much later than other families, and we wondered if one of the reasons might be that pediatricians were not offering ASD screening tests in Spanish.

We recently completed a survey of more than 250 primary care pediatricians in California, asking them about what kind of screening they were offering for children at risk for ASD. We found that:

The study, which was recently published in the journal Pediatrics, suggests that pediatricians still have a lot of room for improvement in early ASD identification. They may especially need more support in identifying ASD among children whose families speak other languages.

If you as a parent have a concern about your child’s development, it is very important to discuss it with your pediatrician. Parents can help pediatricians do their jobs better by coming to them early with their concerns. A free online screening for ASD symptoms can found at: https://m-chat.org/.  Also, ask your doctor if your child was screened for ASD.

Doctors will be more likely to start screening for ASD if parents let them know it is important.