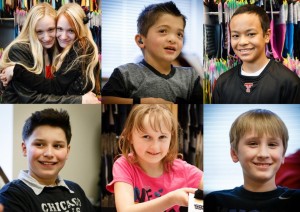 2013 marks the 10th anniversary of Doernbecher Freestyle, and there’s plenty to celebrate. Since the program began, 58 shoes have been produced, each representing the life of a very special kid.

Nearly $8 million has been raised to support OHSH Doernbecher Children’s Hospital, and countless lives have been changed by the young designers who have so graciously shared their stories.

This year, we’ve got seven more stories to tell: Daniel, Elijah, Kate, Kira, Ross, Bella and Jake have all used their very personal experiences to create a new collection of custom Nike footwear and, for the first time, apparel. In doing so, they add another chapter to the remarkable Doernbecher Freestyle legacy.

“It was a total surprise when we got the phone call,” he said. “I kind of freaked out.” Daniel’s freak-out was justified — the 12-year-old Bend resident is a huge Michael Jordan fan, with an encyclopedic knowledge of every game, every comeback and every shoe released throughout Jordan’s illustrious career.

Like Jordan, Daniel has reinvented himself as an athlete again and again. Because his hemophilia causes problems in his ankles, he frequently changes up his sports so that he can continue to compete. “I raced BMX bikes for a while, and I love to play basketball. But I think I’m going to switch to swimming so it won’t be so hard on my joints,” he explained.

Daniel’s shoe, the Nike Air Jordan 10, is also a story of reinvention. It features a slew of first-ever features, like a modified logo that’s customized just for Daniel.

It’s also the first time you’ll ever see a clear outsole on a Jordan 10 shoe. Daniel’s is embossed with a list of Jordan’s accomplishments.

The glossy upper sports a camouflage print that’s inspired by Daniel’s favorite video game. And in a nod to his days riding the BMX circuit, a tire tread races up the heel and straight into the sockliner. The shoe also bears a few more important distinctions:

“It’s the only Jordan 10 shoe that’s ever been designed by a kid!” smiled Daniel. And most importantly, it’s the first with power to help heal a child — by supporting the amazing hospital that changed Daniel’s life.

“Daniel is an active young man. However, his chronic pain limits his actions. Daniel’s quiet strength has not let hemophilia or pain change who he is or negatively affect the positive outlook he brings to all aspects of his life.” – Michael Recht, M.D., Ph.D., adjunct associate professor, Division of Pediatric Hematology/Oncology, OHSU Doernbecher Children’s Hospital.

The 2013 limited-edition Doernbecher Freestyle Collection includes apparel and footwear and will be sold at www.nike.com and at Nike retail locations across the country. All proceeds benefit OHSU Doernbecher Children’s Hospital.