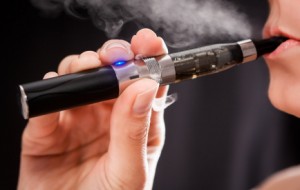 are battery-operated delivery systems for the inhalation of nicotine or other liquids. They consist of a battery, a cartridge that contains liquid, the carrier for nicotine, and an atomizer that converts the liquid into a mist.

When the user inhales or presses a button on the e-cigarette, a small amount of liquid gets released into the vaporizer and is transformed into a fine mist which is then inhaled into the lungs. After entering the lung, the nicotine contained in the mist gets absorbed almost instantly and is transported via the blood into the brain where it exerts its effect.

E-cigarettes were originally invented in 2003 by a Chinese pharmacist and have spread from China across the globe at an extremely rapid pace. Many different brands exist today that deliver varying amounts of nicotine. They have become increasingly popular in the United States with a sharp increase in the number of users over the past few years. Marketing for the devices is aggressive and they are becoming more easily accessible.

In addition, smoking e-cigarettes was also strongly associated with smoking tobacco. Tobacco smoking has tremendous health consequences and it is estimated that 435,000 people die prematurely because of smoking.

The findings from this report raise serious concerns for the future health of our children. Exposure to small amounts of nicotine for a brief period of time can set the path for lifelong addiction in a child. It is known that almost all smokers start their habit before reaching adulthood. In addition, exposure to nicotine at a younger age is associated with higher risk for chronic dependence as less mature brains are more susceptible to the effects of nicotine.

It is said that a journey of a thousand miles begins with a single step. Unfortunately, a lifelong addiction to nicotine can start with one e-cigarette.

Nicotine is a highly addictive drug, and inhalation into the lungs is a powerful delivery route as the drug reaches the brain within seconds after inhalation. The nicotine effect is instant and many people will experience a sensation of relaxation, pleasure, reduced stress and improved alertness. On the flip side, once the brain has become accustomed to daily exposure to nicotine, it becomes dependent on its stimulating effect. Any attempt to quit smoking leads to unpleasant sensations that are associated with strong craving for nicotine to seek relief. This in in turn makes it extremely hard to kick the addiction.

What are some of the concerns regarding e-cigarettes?

So what can a parent do about this?

Pick a time to talk to your teenager when she/he is in a good and cooperative mood. Ask if she/he has heard about e-cigarettes. If not, offer to talk about it. If your teenager knows peers that are smoking e-cigarettes or is using herself/himself offer support in a non-judgmental way.

You can also call 1-800-QUIT –NOW to obtain free advice on how to get started – also a good idea to call if you are a smoker and thinking about quitting smoking.

3 responses to “What parents should know about electronic cigarettes”