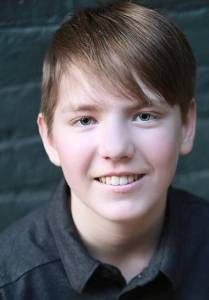 In my work as a pediatric brain and spine surgeon at OHSU Doernbecher Children’s Hospital and OHSU Hospital, I get to meet some pretty amazing children. Alex Shepherd most certainly counts among them.

Alex came to Doernbecher after a seizure led to diagnosis of a brain tumor. Despite the presence of an 11 cm long ‘C’-shaped mass in the depths of Alex’s brain, he remained a charismatic and enthusiastic 10-year-old. Except for the moments of his seizures, he also remained tremendously precocious and bright, with an amazing ability to tell stories and engage with the doctors and nurses around him.

In fact, Alex seemed to be helping his parents and all of us cope with the challenges of his illness ahead.

At Doernbecher, children come from as far away as the distant corners of Oregon and even Idaho and Alaska for care of difficult to treat brain and spinal cord tumors. Even so, Alex’s very complex tumor posed a serious challenge to all members of our multi-specialty team. To help him, we needed to remove the entire tumor despite its extent and depth within the brain, as well as deliver additional therapies. 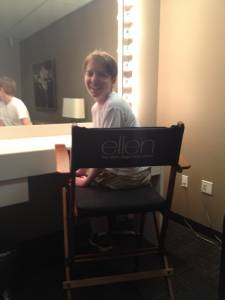 In May 2013, Alex’s therapy began with a series of four brain operations to completely remove different components of his tumor from the front and back regions of the brain.

Recovering from the fourth operation, Alex, we immediately realized, was still Alex, with his sense of humor, intelligence, and engaging personality intact.

He moved on to other parts of Doernbecher Children’s Hospital and clinics to carry on the rest of his therapies. It has been a joy for me to follow his progress through occasional visits back to my clinic in neurological surgery.

Upon emerging from months of intensive surgical and medical care, Alex also made a big impression on a number of other people, including television personality and host, Ellen Degeneres and her huge national audience.

On Feb. 3, 2014, Alex and his parents appeared on “Ellen” and told some of his story to a rapt audience. America could see what we have seen for months: the tremendous spirit and resilience of a terrific child facing a difficult disease with energy and courage, and maintaining everything of himself that his parents and his community celebrate. 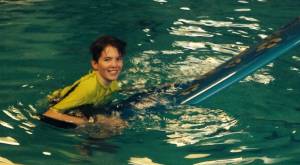 If that were not enough, Ellen and her wonderful team provided a huge boost to the Shepherds. Recognizing the burden of constant long drives from southern Oregon for Alex’s treatments at Doernbecher, and the impact of missed work for his parents who are dedicated to his care, Ellen surprised the Shepherds with a new car and $10,000 cash to help cover expenses!

There was not a dry eye in the television studio or at Doernbecher, where doctors and nurses crowded around screens to watch the touching interview.

Alex and his family, and countless patients and families like the Shepherds, remind us of why we are blessed to do the work we do. Thanks Alex.

Alex’s interview with Ellen: “A New Car for an Inspiring Family.” 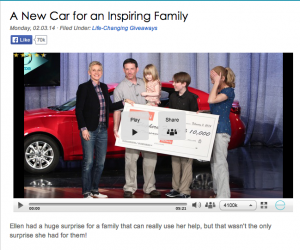 One response to “Resilience”