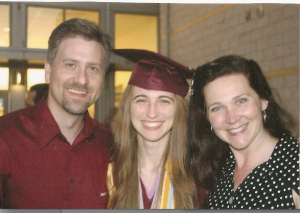 Victoria was 13 when she started experiencing unrelenting sleepiness. This was out of character for her and was confusing because she was getting the amount of sleep most kids her age need. She and her parents attributed the increased need for sleep to adolescence. They became much more concerned when she started falling to the ground unexpectedly.

She was assessed twice in the emergency room for this problem and admitted to the hospital after the second ER visit. The assessment for medical and neurologic causes of passing out (medical term is syncope) was negative, and the problem was attributed to stress.

Victoria was referred to a therapist but no stress was found outside of the stress of dealing with an undiagnosed medical problem. By the time she was referred to a psychiatrist, her “passing out” spells were increasingly associated with emotions such as laughter and joy.

The psychiatrist was suspicious of narcolepsy and referred her to the OHSU Doernbecher Pediatric Sleep Disorders Clinic where she was diagnosed with narcolepsy with cataplexy, which is loss of muscle tone associated with experiencing strong emotions, a phenomenon that occurs almost exclusively in patients with narcolepsy. The diagnosis involved taking a careful history, and overnight and daytime sleep studies.

Narcolepsy is a sleep disorder affecting 1 in 2,000 individuals. The onset typically occurs in adolescence, but there often is a delay in diagnosis. In the past, diagnosis sometimes took as long as 15 years. Fortunately, patients are now being diagnosed much sooner after symptoms appear.

Classic symptoms and signs of narcolepsy include:

We now know that narcolepsy is a neurologic condition involving a relatively small cluster of neurons in the hypothalamus of the brain. These neurons make a neuropeptide, hypocretin, also knows as orexin, which is involved in positively affecting alertness. In narcolepsy, especially the type of narcolepsy involving cataplexy, these neurons stop functioning and hypocretin levels plummet. Scientists hypothesize that these neurons become nonfunctional due to an autoimmune process much like the process responsible for multiple sclerosis.

Fortunately, once recognized, narcolepsy can be effectively treated although not cured. Treatment includes education about the condition, scheduled naps and medications. Ongoing management by a sleep physician is indicated.

Since being accurately diagnosed, Victoria has taken charge of her illness, finishing high school, competing in cross-country running, and now succeeding in college.

Victoria shared her story with KGW-TV a couple of years ago.